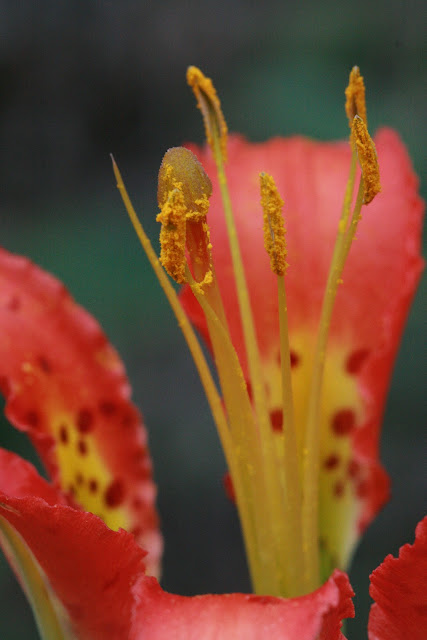 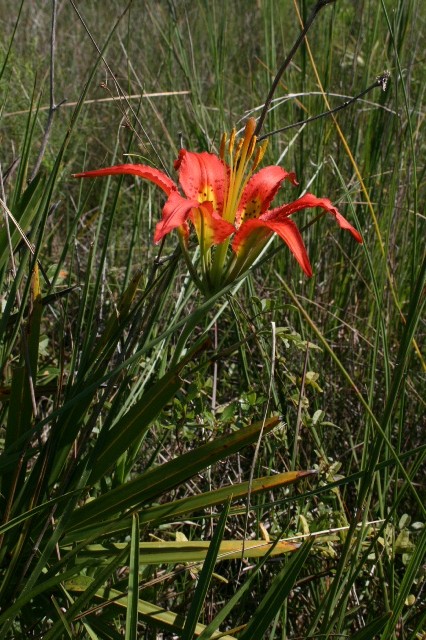 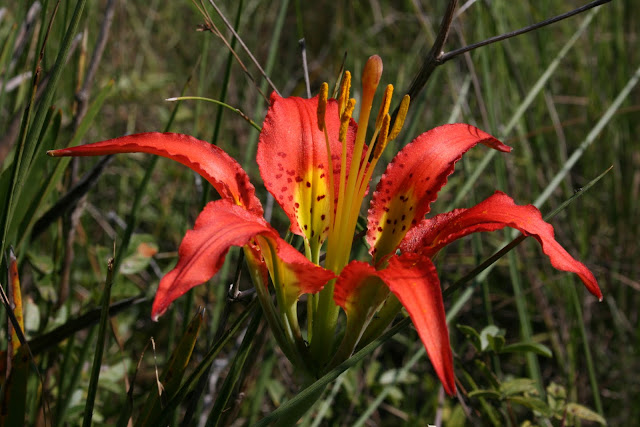 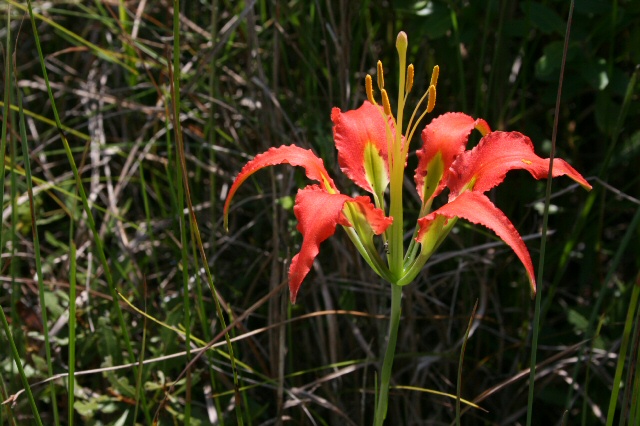 Catesby's lily (Lilium catesbaei), also known as the "pine lily", is the most widely distributed member of this genus in Florida.  Found nearly statewide in moist pinelands and open savannas and prairies, Catesby's lily is still a rather uncommon occurrence and is listed as a state-threatened species.  Though widespread, it is extremely sensitive to growing conditions and requires just the right combination of soil moisture, light, and fertility to prosper.  Catesby's lily occurs in similar habitats in much of the Southeastern Coastal Plain - from Louisiana to Virginia and is only listed in Florida.
It is resident to open habitats that routinely become wet to saturated during the summer rainy season.  In the pine flatwoods where I have studied them for many years, they are found in the lower pockets that remain moister than the norm.  In wet flatwoods and prairies, such as Kissimmee Prairie Preserve State Park, they are more uniformly distributed.  Catesby's lilies also require high light levels to prosper.  Areas that become overgrown due to lack of regular fire, soon lose their lily population.  Plants may linger as bulbs beneath the soil surface for years, but may not even produce leaves while they wait for things to open up.  Plants quickly respond to fire; both because it reduces competition from neighboring plants (especially the woody ones) and because it provides a shot of fertilizer in the ash.  Areas that have recently been burned often have significantly larger populations of blooming lilies.
Like other lilies, Catesby's lily loses its leaves in late fall and produces new ones in early spring.  In plants that should bloom, a dense rosette of linear, pointed leaves arises around the bulb; each leaf about 2-3 inches long.  The flower stalk eventually emerges from this rosette in early summer and elongates throughout the next 3 months or so.  By early September, it reaches its mature height of about 2-3 feet.
Individual plants rarely produce more than 1 flower, but these are spectacular.  The blooms vary in color from yellow (a fairly rare color) to almost red, but most are a brilliant orange with darker spots near the base of each petal.  The amount of spotting is also extremely variable - this is seen from my photographs above.  Each flower is 3-4 inches across and remains open for about a week.  They attract a variety of pollinators, but seem to be pollinated mostly by large swallowtail butterflies - especially Palamedes and Spicebush. Blooming in Pinellas County may start in early September and sometimes lingers into December if below freezing temperatures don't arrive.
Pollinated flowers produced elliptical seed capsules about 2 months later.  Each produces hundreds of papery seeds, designed to blow away a short distance from the parent plant.  Few seeds eventually grow into new lilies and it takes several years before they reach maturity and produce flowers.  Plants are also generated by the bulbs.  Like other lilies, mature bulbs produce "bulblets" off the side and these can produce new plants as well.
Though beautiful, Catesby's lily is not easy to grow in the landscape or easy to propagate from seed.  For this reason, it is rarely offered for sale by commercial nurseries - in Florida or elsewhere.  I have had success growing it in my landscape by planting it in large landscape pots set inside a large saucer.  The pots allow me to regulate the potting soil and light, and the large saucer maintains the moisture.  During the summer when rains are more predictable, the saucer stays full and the soil in the pot remains nearly saturated.  Under these conditions, my lilies have fared very well.  I have never had this type of success planting the bulbs directly into my landscape.
Hopefully, this species will become more widely propagated and put into the hands of gardeners capable of growing it.  Catesby's lily is one of my favorite Florida wildflowers and I get a thrill each year when thery come into bloom.  Take a hike through a wet flatwood or prairie in late September-October and look for them.
Posted by Hawthorn Hill at 6:19 AM