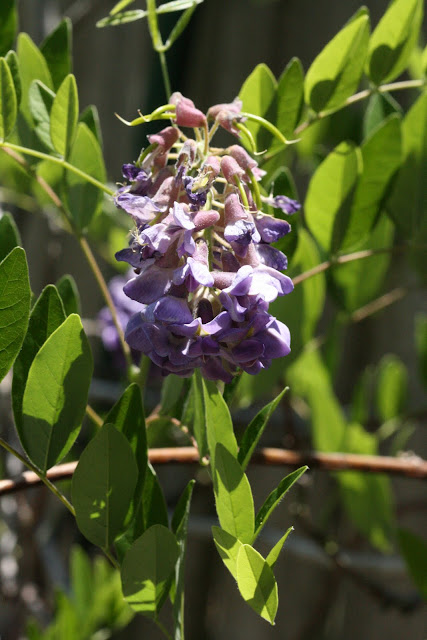 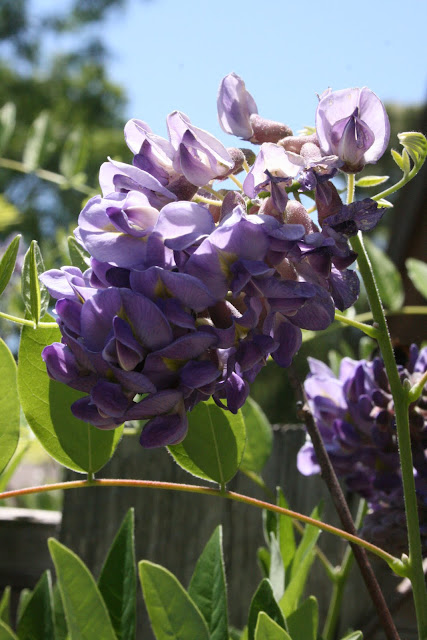 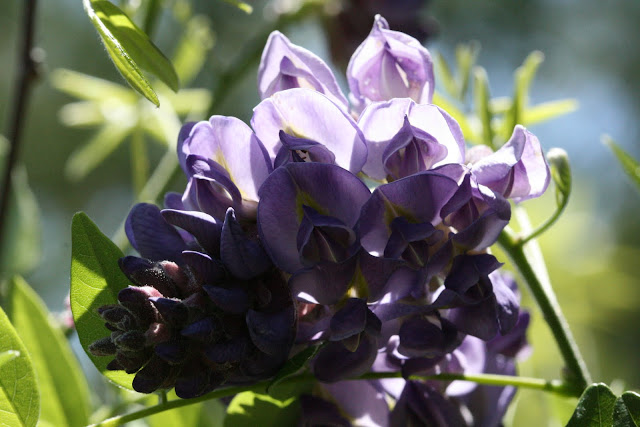 American wisteria (Wisteria frutescens) is our only native wisteria.  The other commonly planted species all originate from Asia and can be quite invasive.  American wisteria occurs naturally in Florida only in the panhandle and a few scattered counties in north Florida.  It also occurs throughout nearly every state in the eastern half of the U.S.  Like its Asian relatives, it is a vine that rambles extensively throughout the adjacent vegetation and it can eventually extend its reach many feet from the main stem.  But, compared to Chinese and Japanese species, it is diminutive.
American wisteria is a wetland plant and most common at the edge of forested wetlands where it gets partial sun - or at least some shade for part of the day.  It is quite adaptable, however, and can be grown in the landscape in much drier soils and in nearly full sun.
It is deciduous and remains leafless for several months during the winter.  In April to early May, the compound leaves are quickly followed by many flower buds.  These are produced on last year's growth, so it is very important not to prune these plants back in winter while they are dormant.  Each flower bud is composed of many dozens of rich purple flowers.  As this plant is in the bean and pea family (legumes), the flowers are distinctive and are followed by small heads of beans, each containing a few hard seeds.
American wisteria can be grown very effectively on a fence or trellis where its rambling growth can be somewhat maintained.  It does not have tendrils, so it may have to be helped at first while it tries to find a place to hang on to.  Give it a bit of extra water during periods of extended drought and it will perform well nearly statewide.  The plant we added to our Pinellas County landscape has bloomed profusely for years and has required very little care or attention.
American wisteria is sometimes offered by nurseries associated with AFNN - the Association of Florida Native Nurseries, though it may take some looking to find it.  We do not grow it at Hawthorn Hill, but it would be quite easy to take our seed and germinate them should an interest for it arise.  Ask us if you are interested.
Posted by Hawthorn Hill at 4:14 PM