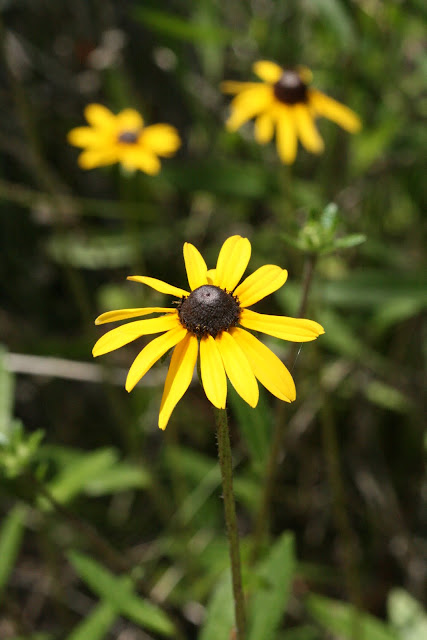 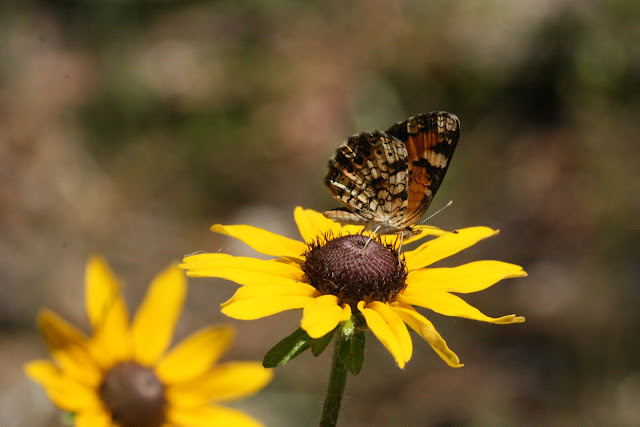 Since early childhood, I have been in love with the simple beauty of black-eyed susan (Rudbeckia hirta).  I remember my grandfather taking my brother and me for drives into what was then "country" to a wildflower farm where they sold cut flowers.  Black-eyed susans were always among the bouquets we brought home. They brought life to every arrangement and they were nearly always in bloom. And, though there may be showier species in this wonderful genus, the simplicity and ease of growing it is hard to surpass.
Black-eyed susan is ubiquitous in Florida and occurs in every state of the U.S. except Hawaii and Alaska, as well as all the southern tier of Canadian provinces.  It is a variable species, however, and takes on different "identities" in diferent parts of its range.  Two distinct forms are found in Florida.  If you live in the northern 1/3 of the state, you are most likely to see R. hirta var. angustifolia.  Where I live in central Florida and further south, the black-eyed susan we encounter is R. hirta var. floridana.  The north Florida variety generally branches midway up the stem, the basal leaves are more lanceolate and the stems are soft-hairy.  Variety floridana (pictured above) generally branches near the basal leaves and the stems are stiff-hairy.  Both forms are commonly sold commercially by memberes of AFNN - the Association of Florida Native Nurseries and it is generally true they sell the form most common to their latitude.
Although garden catalogs offer large showy black-eyed susans to home gardeners (including the so-called "gloriosa daisy"), these will quickly perish here in Florida.  Our native varieties are not as robust and their flowers are not as large, but they are extremely adaptable.  Native black-eyed susans generally act as annuals or, at best, biennials.  They reseed abundantly in most settings, however, and often are a common component of the flora.  Seedlings mature quickly and often flower during their first year.  Mature plants are rather thin and without well-developed basal rosettes of leaves.  They rarely stand taller than two feet.  Flowers are produced from early summer through fall.  Individual flower heads are about two inches across and composed of bright yellow ray flowers surrounding a black core of disc flowers.
Black-eyed susan occurs in a wide variety of open habitats and is adaptable to nearly every setting except very wet or dry locations.  It also is not salt tolerant.  Use this species mixed with other open understory wildflowers - species such as coreopsis, blazing star (Liatris spp.), pink beardtongue (Penstemon australis), wild petunia (Ruellia caroliniana) and grassleaf goldenaster (Pityopsis graminifolia) and short native grasses such as wiregrass (Aristida spp.) and pinewoods dropseed (Sporobolus junceus) in the front half of the planting.  Because this species is not very tall or robust, it works best planted in clusters and in locations where it can be easily admired.  Realize, though, that it also is not long-lived and it will move around your planting area wherever it can find some open soil for its seed to germinate in.  In most gardens, black-eyed susan increases over time and this increase is welcome.  Do not mulch your beds with heavy mulches or it may not be able to reseed well and do not deadhead your plants until late winter (if at all) or you may remove your seed source.
Because of its wide popularity, black-eyed susan is commonly available in the nursery trade.  In my experience, it is best to use the native variety found naturally in your latitude.  I have had far better success, for example with var. floridana in my Pinellas County landscape than I have had with var. angustifolia. DO NOT USE non-native varieties unless you wish to use them only as short-lived annuals.
Posted by Hawthorn Hill at 12:35 PM