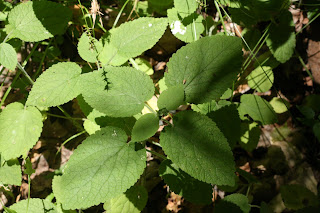 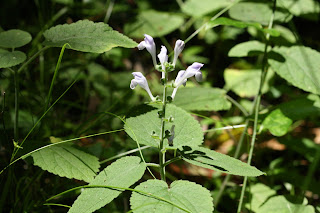 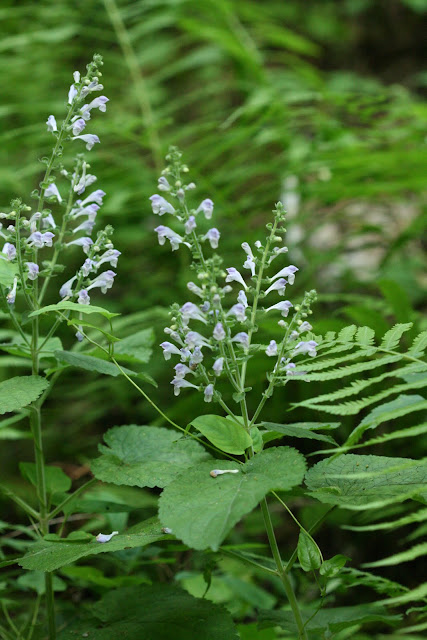 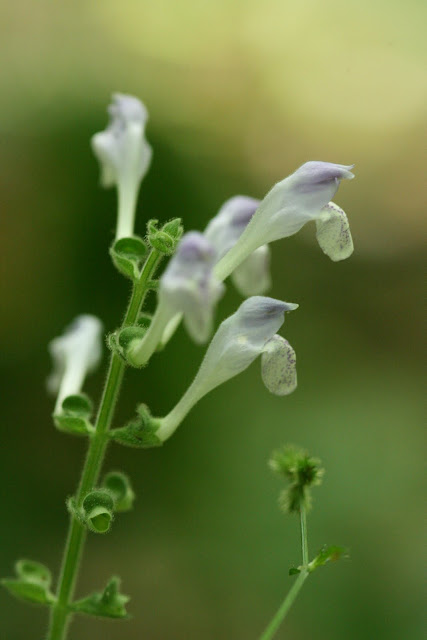 The skullcaps (Scutellaria spp.) are a large and diverse group of wildflowers in the mint family.  Their common and Latin names come from the wafery cap-like seed capsules that follow flowering and persist along the stem.  Florida is home to 13 distinct skullcaps and the various species occur in nearly every type of habitat.
Heartleaf skullcap (Scutellaria ovata) is one of our rarest; having been reported from only two Florida counties quite disjunct from each other.  The plants photographed above come from a small, but thriving population, rather recently discovered in Hernando County.  Prior to this, the only known population occurred in Escambia County - the farthest west county in the Florida panhandle. Though very rare in Florida, this species in its many forms occurs throughout the eastern half of the U.S.
Heartleaf skullcap has oval, heart-shaped leaves which are quite distinctive for this genus.  The leaves are large; up to six inches long and an equal length across.  The edges are noticeably toothed and the leaf veins are deeply indented.  Like other members of this genus, it is deciduous and makes its appearance in early spring.  Mature plants may reach several feet tall prior to blooming.
Flowering occurs in mid-spring.  The plants above were photographed in early May, 2010, but most species have bloomed about 3 weeks later than normal this year because of our colder-than-normal winter which preceded this.  The flower stalks arise from the main stem and stand about one foot above the highest leaves.  Flower shape is typical for the genus and the color is a pale lavender with a lightly spottted lower lip.
Heartleaf skullcap occurs in shady hammocks where it receives filtered light during the day.  The population in Hernando County was mostly situated in sun spots within the shady forest floor and occurred in a sinkhole with limestone at the surface.
Heartleaf skullcap would seem to be an excellent candidate for use in a shady forest landscape - used in much the same way that columbine, woodland phlox, violets, and other such wildflowers would be.  Although it is very rare in Florida, it is widespread in states to our north and is offered by several nurseries outside of Florida.  Our subspecies, S. ovata spp. bracteata, however, is a bit more difficult to find commercially and is the only one I would recommend trying here.  I would love to experiment with this species should the opportunity ever arise, but until then I will remain content to simply view it in its native habitat and be thankful that its small natural Florida population is largely protected.
Posted by Hawthorn Hill at 5:20 AM