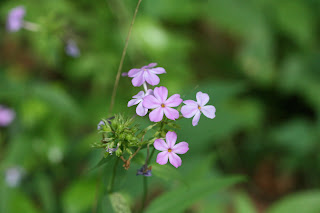 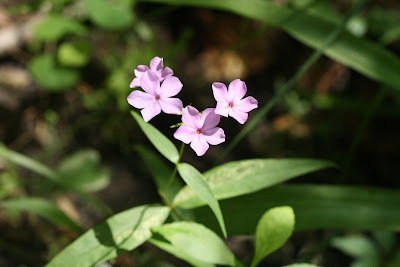 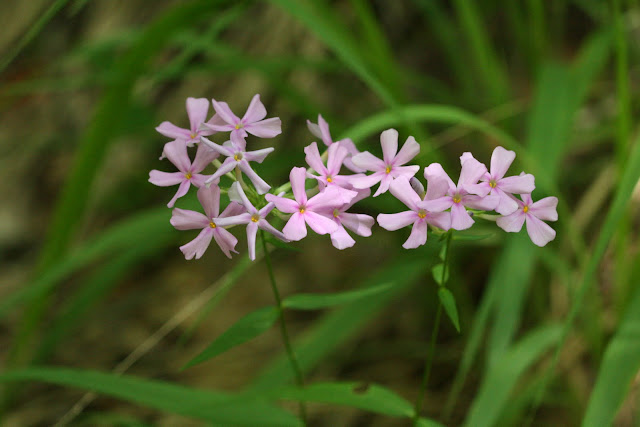 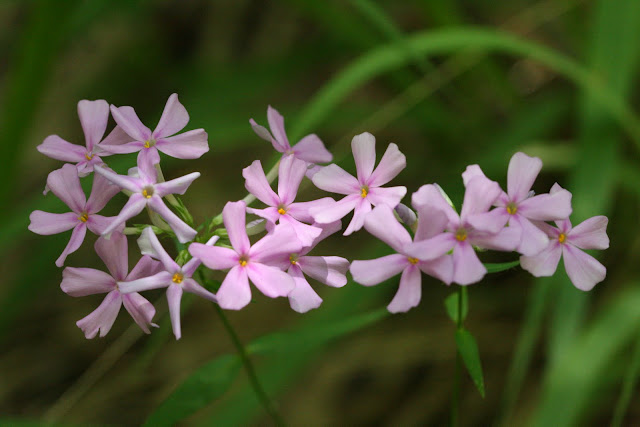 In many respects, smooth phlox (Phlox glaberrima) closely resembles downy phlox (P. pilosa).  Their distribution overlaps and it is not uncommon to find both growing in somewhat close geographic distances from each other.  There are, however, some very noticeable differences.  While downy phlox (covered elsewhere in this blog) is noticeably "hairy" - especially near the top of the stems, just beneath the flower heads, smooth phlox is not.  Secondly, the yellow stamens extrude slightly outside the floral tube.  They are not visible in downy phlox.  Lastly, its noticeably lance-shaped leaves are much different from the thin leaves present on downy phlox.
Smooth phlox also occurs in very different habitats than its close cousin.  This is a plant of woodland understories and moist locations where it gets filtered or part sun; never full  sun all day.  In Florida, it is distributed throughout much of the central and western panhandle, but it is rather common in most of the eastern U.S. as far north as Wisconsin.
Smooth phlox is deciduous and appears each year in early spring.  Generally, it produces a main stem that remains less than 2 feet tall, though its length may be greater.  At it reaches its mature length in late spring, it tends to bow over with the weight of its developing flower buds.  Blooming occurs from April to early summer.  Large clusters of soft pink flowers open at the end of each stem.  These are pollinated mostly by butterflies, though some bees and other pollinators may also visit them.
Although this genus is widely cultivated throughout the U.S. in wildflower gardens, few of Florida's native phloxes are routinely offered by nurseries affiliated with AFNN - the Association of Florida Native nurseries.  This is very regrettable as most make absolutely beautiful additions to mixed wildflower gardens - given the correct growing conditions.  To the best of my knowledge, no Florida nursery has yet offered smooth phlox.  It is a species we are looking to add to our collection at Hawthorn Hill, so ask us if you are interested.
If you are lucky enough to obtain some from somewhere, plant it in small clusters of at least three at the edge of a shady woodland garden or in a light gap where it might receive a few hours of sunlight.  It seems adaptable to a wide variety of soil conditions, but do not attempt it in exceedingly well-drained soils.  It prefers above-average moisture, but it has some drought tolerance if not kept too dry for too long.
Posted by Hawthorn Hill at 11:25 AM