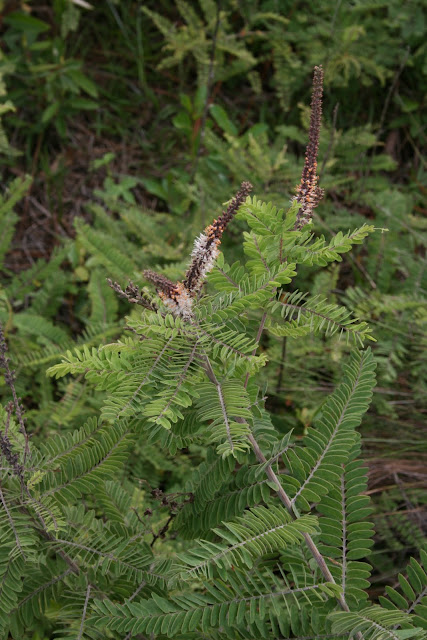 Dwarf indigo (Amorpha herbacea) is a somewhat "plain Jane" in comparison to its better known cousin, false indigo (A. fruticosa), but it has its own subtle beauty and value to a landscape composed of wildflowers.  It is rarely, if ever, propagated by commercial sources at this time, though we are correcting that at Hawthorn Hill.
I prefer to call this leadplant "sandhill leadplant" for its affinity to upland habitats.  This species occurs throughout much of Florida and in our neighboring states of the Deep South.  In extreme south Florida, it occurs as a very rare variety and component of the pine rockland community, (A. herbacea var. crenulata).  Crenulate leadplant is a state endangered species and was once afforded separate species status.  Today, taxonomists consider it to be a variety of dwarf indigo.  Throughout its range, this species occurs in droughty, well-drained soils with full sun.  It is adaptable, but will not tolerate soils that remain wet.
Dwarf indigo is deciduous and remains leafless during the winter and early spring.  The showy compound leaves are noticeably longer than in false indigo and are silvery blue-green in color; making the foliage one of the best features of this woody wildflower.
Blooming occurs most often in early summer.  The elongated flower racemes are composed of a large number of tightly packed creamy white flowers with contrasting orange-yellow anthers.  Although these blooms are not especially showy in comparison to false indigo, they are attractive and they attract the same variety of bees, butterflies, and other pollinators.  The foliage provides the larval food for the same two butterflies; the southern dogface sulphur and silver-spotted skipper - as well as for herbivores such as rabbits and white-tailed deer.
Dwarf indigo rarely exceeds 3-4 feet tall and can be kept even shorter by regular pruning.  It tends to grow outward, however, and may form a dense crown equally wide as it is tall.  Because of its density, other plants cannot be grown beneath it.
If you have well-drained soils, plenty of sun, and the necessary space, dwarf indigo can be a very interesting addition to a landscape devoted to wildflowers and butterflies.  Use it towards the back of the garden or as a small grouping in the center to serve as a focal point.  Hawthorn Hill is currently growing this species in our Pinellas County nursery and has it available to others who may wish to try it.  Give me a call or drop me an e-mail if you are interested in this or any other wildflower curently in our catalog.
Posted by Hawthorn Hill at 6:18 AM