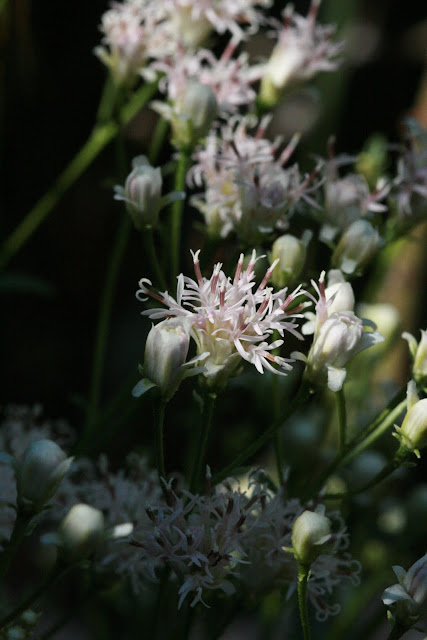 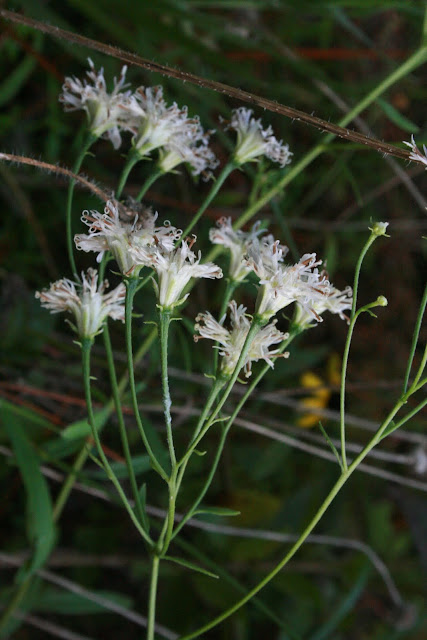 Coastalplain palafox (Palafoxia integrifolia) is found throughout Florida, except for the western panhandle, and in parts of Georgia - in well-drained sandy uplands.  Unlike its endemic relative (P. feayi), it is not restricted to scrub and sandhill, but can be found in a variety of other upland settings.
This is a more diminutive species as well - though still tall and robust in character.  Coastalplain palafox is a deciduous perennial which dies to the ground each winter and re-emerges in early spring.  The individual stems elongate immediately and there are no real basal leaves.  These leaves are alternate along the stem and glossy green in color.  The lower leaves are elongate and they become nearly linear near the top of the stem.  Stems reach a mature height of 3-5 feet on average by the fall blooming season.
Like its close relative, P. feayi, the flower heads are produced atop the stem and its many side shoots, but these flowers have "petals" around the central tube.  And, although lacking true ray flowers, the frilly pinkish white disc flowers produce an attractive and "softer" look to the inflorescence.  Color in this species can be variable with some plants producing only white flowers instead of those which are decidedly pinkish.
Despite its adaptability, its ease of culture, and its attractive blooms, coastalplain palafox is not regularly offered for sale by any of the nurseries associated with AFNN - the Association of Florida Native Nurseries.  We have grown it for years, however, in our gardens at Hawthorn Hill and often have seedlings available.  Let us know if you are interested.  Use this species in small groupings in the back of a mixed planting bed with other tall wildflowers and larger native grasses.  Because it produces as many as a dozen stalks on mature specimens, a few plants will go a long way.  Its stems are not as woody as those of feay's palafox and they will droop if not given sufficient sun.  Even then, we sometimes stake a few of them to keep them fully upright.
Posted by Hawthorn Hill at 6:38 AM