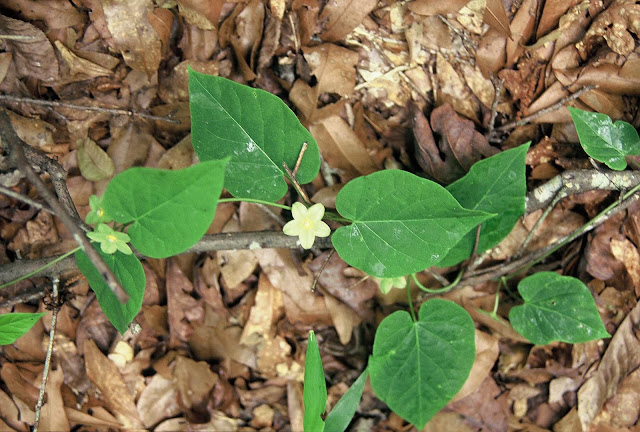 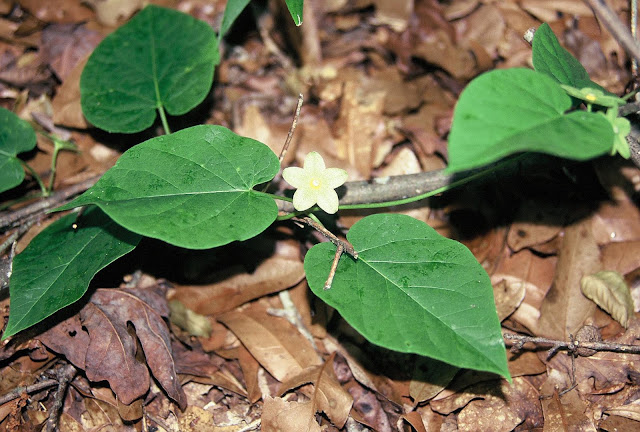 Alabama spiny pod (Matelea alabamensis) is yet another very rare member of this genus in Florida; known only from Walton and Liberty counties in the panhandle and listed as a state-endangered species. Like other species I have described in this blog,  it is a deciduous herbaceous vine found in the understory of deciduous forests.  It differs, however, by creeping along the forest floor instead of rambling up and through the understory vegetation.
Alabama spiny pod emerges in the early spring and quickly begins trailing along the ground.  The heart-shaped foliage is opposite along the thin stems.  Each leaf is about 5 inches wide and about 6 inches long.
Flowering occurs in late spring and early summer.  The flowers are produced in small clusters in the leaf axils.  The petals are generally a pale green in color - with a sheen that makes them almost transluscent.  The 5 petals are rounded and each flower is relatively flat in appearance.
Like all members of this genus, Alabama spiny pod produces a milky sap when the stems or leaves are injured.  This makes it an excellent potential food plant for the caterpillars of queen and monarch butterflies, but because it occurs low on the forest floor in relatively shady locations, it rarely gets used by them.  Pollinated flowers produce the characteristic spiny elongated pods which open to set loose the typical milkweed seeds.
Alabama spiny pod will never likely be grown commercially and will remain another example of Florida's amazing botanical heritage.  It is often overlooked because it is difficult to see - even when in bloom.  Look for it when hiking the types of habitats it is known to prefer and perhaps we can find it in counties adjacent to where it is currently known.  If you see it, make note of it and report your findings to one of the state herbariums.
Posted by Hawthorn Hill at 9:30 AM