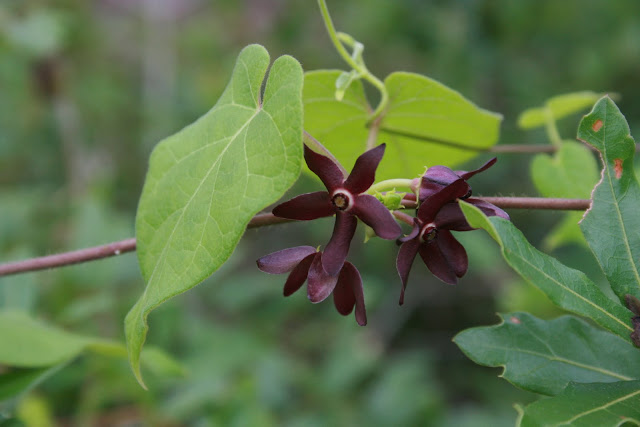 Florida spiny pod (Matelea floridana) is a state-endangered species found in scattered locations throughout much of the peninsula and a few counties in the panhandle.  It is also found in three counties in Georgia. Like other members of this genus, it is a deciduous herbaceous vining milkweed that produces a milky sap when the leaves or stems are cut or injured.  And, because it occurs in open sunny locations, it serves well as a larval host plant for milkweed butterflies; monarchs, queens, and soldiers.
Florida spiny pod is resident to upland sites; open woodlands, sandhills and open fields.  It is a sprawling vine that emerges quickly in the spring and weaves its way through nearby understory vegetation.  The leaves are heart-shaped, but somewhat elongated, opposite on the stems and several inches long.
Flowering occurs in late spring-early summer.  Each bloom is a rich burgundy red with five petals and rather flat.  All Matlea species are pollinated mostly by beetles and the pollinated flowers eventually ripen into elongated spiny pods which release the typical milkweed seeds.
Unlike many other members of this genus, Florida spiny pod is somewhat adaptable to growing conditions and has the traits that would warrant it being grown in the home landscape; especially by butterfly gardeners.  To my knowledge, however, it has never been propagated commercially.  And, as an endangered species, its seed cannot be collected without permission of the landowner and permits by the Florida Department of Agriculture and Consumer Services.  So, those of us that might be interested, will simply have to hope that someone will make this interesting species available to the rest of us through legal channels.

Posted by Hawthorn Hill at 5:05 AM