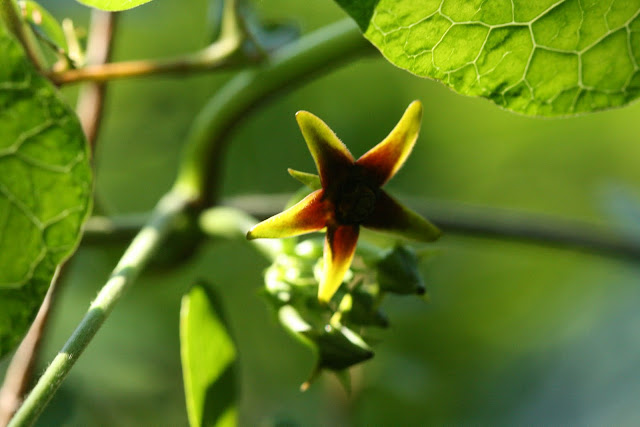 Spinypod, sometimes referrred to as Anglepod, (Gonolobus suberosus; fka Matelea gonocarpos) is a member of the milkweed family and formerly included in a small group of vining milkweeds, the Mateleas.  Recent taxonomy has placed it in its own genus for small differences in its fruit and flower structure.  Like nearly every member of the Mateleas, this species is quite rare in nature and listed as a state threatened species.  Spinypod is found nearly statewide, however, in upland sites, such as sandhills, with well-drained sandy soils and high levels of sunlight.  And, like all nearly all members of this family, the vines and leaves produce a milky sap if injured and serve as larval food plants for members of the milkweed butterfly family.
Spinypod is a rambling deciduous vine.  After emerging in the spring, it quickly grows into a multi-branched herbaceous vine that grows over and through nearby vegetation.  At times, it may be difficult to see, but its presence is given away by the star-shaped flowers and/or the presence of female milkweed butterflies (esp. Queens and Monarchs) laying eggs.
Spinypod, like other close relatives, has heart-shaped leaves; nearly 1" across and more than 1" long.
Flowering occurs in summer.  The flowers vary a bit in color, but the 5-petal, star-shaped blooms are often maroon red in the center and edged on the outside by greenish yellow.  The petals are thick and fleshy in texture.  A month or more after flowering, the very spiny and angular seed pods mature.  They split open like other members of the milkweed family and the seeds are carried away by the fluffy pappus attached to the end of each.
Spinypod is relatively easy to grow if given soils with good drainage and high levels of sunlight.  It has been offered for sale by commercial nurseries only rarely and is not currently offered by any nursery affiliated with AFNN - the Association of Florida Native Nurseries, though a few mail order specialty sources list it.  This plant is of interest mostly to the most dedicated butterfly gardeners wishing to use as many native species as possible in their landscape and to the most dedicated plant connoisseurs.  Its rambling vining habit is not a feature many gardeners appreciate and its flowers are not so spectacular to make it a mainstay in most wildflower plantings.
Yet, this species has its own unique charm and it will hopefully always remain available to those who wish to add it.
Posted by Hawthorn Hill at 7:35 AM