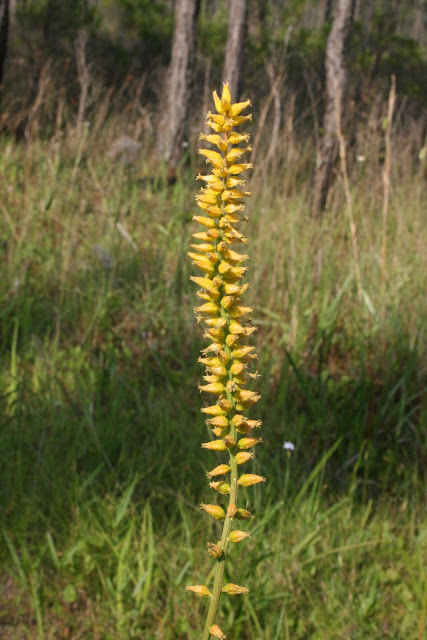 Florida is home to five colic-roots; the genus Aletris and a member of the lily family.  Several are quite rare and confined to rocky open habits in very restricted ranges in Florida while the other three are rather widespread and more commonly found in open moist savannas and flatwoods.  Yellow colic-root  (A. lutea) is the most common and widely distributed member of this genus in Florida and definitely one that occurs in open moist habitats. This species is found nearly statewide and in the states immediately adjacent to us.
Yellow colic-root is a deciduous perennial.  It emerges in the spring as a basal rosette of thin leaves.  Shortly afterwards, it begins production of its thin, nearly leafless central flower stalk.  At maturity in late winter or early spring, this stalk may stand 3 feet tall.  Flowering occurs anytime from late winter until July, depending on latitude and weather  conditions.  As the common name implies, the individual blooms are yellow and they are clustered tightly together on the top of the stalk.  They are vase-shaped with a tiny opening for butterfly pollinators, and covered with "bumps".  A similar, much rarer species found only in the panhandle, A. aurea, does not have this bumpy surface.
Yellow colic-root is rarely offered for sale and is not especially easy to maintain in a landscape.  It needs regularly moist soil to persist and partial to full sun.  If these conditions can be provided, it makes a very interesting accent to a mixed species planting.  Use it in small masses of at least 3-5 plants each and scatter them in the mid-section of the planting area.  This plant essentially "disappears" after going to seed in summer, so it is best mixed with other medium-tall wildflowers that bloom later in the year.
We do not currently have this species in our Hawthorn Hill landscape and are not likely to attempt it in the future.  But, if you have the right conditions, it is worth seeking out from a nursery source and giving it a try.
Posted by Hawthorn Hill at 6:57 AM