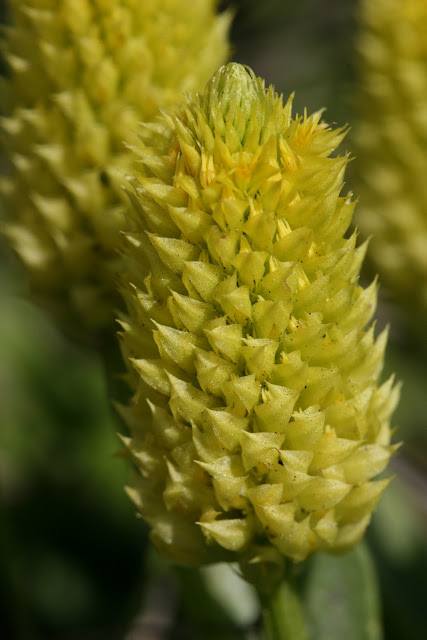 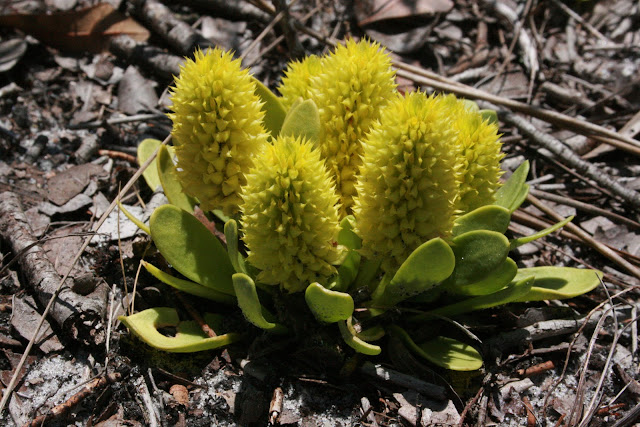 Candyroot (Polygala nana) is a diminutive member of this diverse genus.  It is found statewide in Florida in a variety of moist soil habitats and throughout the Southeast.  It seems to be especially abundant in pinelands where the ground is relatively open and in low pockets where moisture levels are a bit higher.
Candyroot is an annual (sometimes persisting for two years) that emerges in the spring. Eventually, it forms a small rosette of spatula-shaped almost-succulent basal leaves that stand about 1-2 inches tall.  Rabbit's-foot heads of flowers are formed interior within the leaves and these stand several inches taller.
Flowering is most common in summer.  The entire head blooms at about the same time and each of the tiny flowers is a light lemon yellow - hence the Latin name. This plant tends to occur in patches and often substantial areas of the ground are covered with this attractive wildflower. Then, it disappears.
Because of its size and annual nature, I know of no commercial nursery that has or is propagating this species.  It is relatively easy to maintain, given the right growing conditions - sun and moist soils, but I have never had it persist over time by reseeding.
Look for this plant in the summer - right after the start of the rainy season and admire for its own right.
Posted by Hawthorn Hill at 8:03 AM