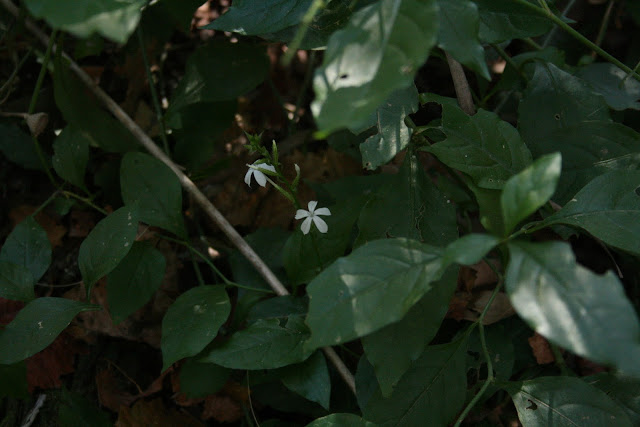 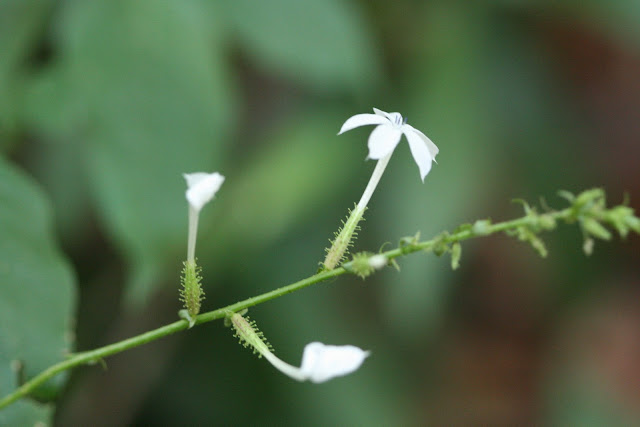 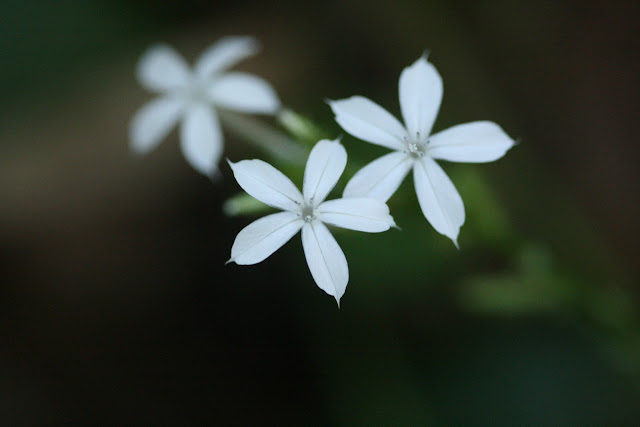 Florida's only native plumbago, (Plumbago scandens), is a sprawling sub-shrub native to coastal hammocks from south-central to south Florida.  It is sensitive to freezing temperatures and its range is restricted to areas that do not regularly get below the upper 20's F during the winter months. If it doesn't freeze back, it is evergreen and may bloom during any month.
This plant is very different from the non-native blue plumbago so often planted in Florida as an ornamental.  For one, it acts almost like a vine in the understory; rarely reaching more than 12 inches in height, but growing outward from the central stem for 3-4 feet or more.  The stems are narrow and relatively fragile.  Elliptical-shaped leaves are alternate on the stems, quite thin, and generally deep green.  The color becomes more yellowish when plants are grown in higher levels of sunlight.  Over time, individual plants become dense from the interwoven stems.
The flowers are bright white and tubular.  Blooming is somewhat sporadic across the plant; a few flowers are nearly always present, but never in the abundance seen in its non-native cousin.  Pollinated flowers (mostly by butterflies) eventually ripen into cylindrical seed capsules that are covered by hooks.  By this means, they catch onto everything that brushes against them (fur, socks, pants, etc.) and eventually get carried to all areas of the landscape.
Despite its general lack of ornamental traits, native plumbago is a valuable addition to a butterfly landscape.  It is the native larval food source for the Cassius blue and they will use this plant during most months when temperatures are above freezing.
Native plumbago is only occasionally offered for sale by commercial nurseries affiliated with AFNN - the Association of Florida Native Nurseries and may take some looking to locate.  It is fairly drought tolerant, once established, and tolerant of a variety of sunlight levels, but it does best when planted in partial sun in locations with a bit of extra moisture.  We have grown this species for some time now in our landscape at Hawthorn Hill, but have never propagated it.
Posted by Hawthorn Hill at 7:54 AM