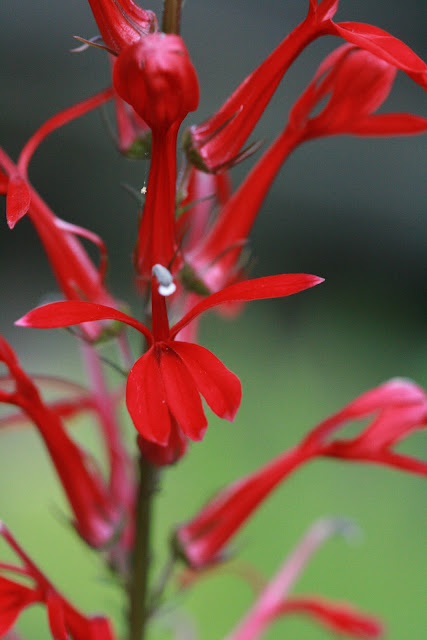 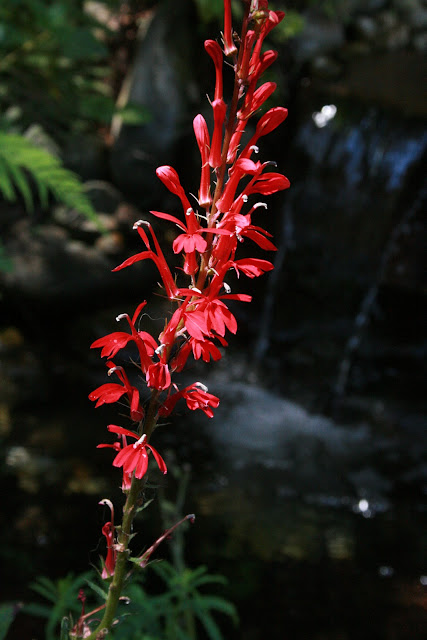 There are ﻿few more stunning wildflowers than cardinal flower (Lobelia cardinalis).  This amazing wildflower is native to the northern half of Florida and much of North America, except the far Northwest.  Everywhere it occurs, it is held in high esteem and actively propagated.
In Florida, cardinal flower is most common along stream and river edges - in the shallow backwater areas that stay wet year-round and are often flooded with several inches of water.  It can occur in other moist soil habitats as well, but does not perform as well there.
This is a deciduous perennial.  In warmer parts of its range in Florida, it may retain a rosette of basal leaves through the winter, but most often it dies back below ground.  Leaves emerge in early spring.  They are bright green, triangular with somewhat wavy edges, and almost succulent.  Mature plants eventually produce "pups" off the sides of the rosette - so eventually multiple rosettes with multiple flower stalks are formed.
Flower stalks begin to be apparent in late spring and eventually reach their full height by mid-summer.  Depending on growing conditions and maturity, these stalks may stand 4-5 feet tall.  Large numbers of buds are produced along the stem and flowering begins at the bottom and works its way to the top.  Because of this, plants may be in flower for nearly a month.  The bright carmine red blooms are tubular with wide-spreading petals.  They are one of the very best at attracting the attention of hummingbirds, but are also pollinated by large butterflies and bees.
Cardinal flower is widely propagated and is relatively easy to find from native plant nurseries.  It is relatively long-lived and easy if kept wet.  I have had my best success by keeping it in pots and placing them in shallow water in my pond.  Even then, cardinal flower is attacked by a variety of insects that girdle stems and eat leaves.  Do not allow such pests free reign or you may lose your plants for good - or at least lose a year of flowering. Cardinal flower can grow well in full sun to partial shade.  In sunny locations, it needs plenty of water and in shadier locations it may not bloom as well.
Posted by Hawthorn Hill at 2:39 PM