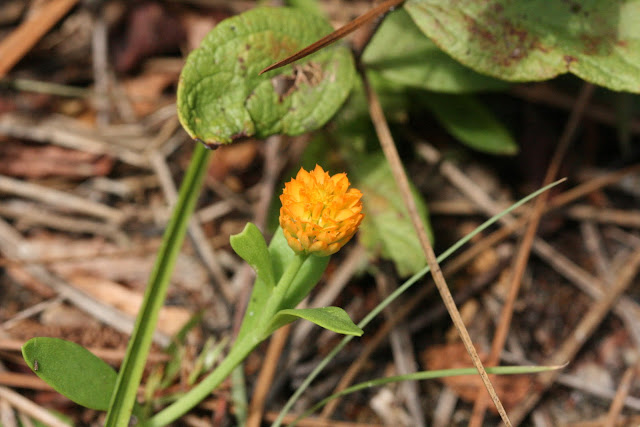 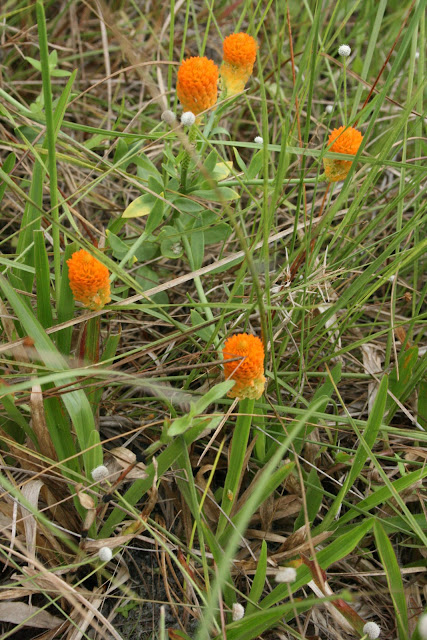 The other diminutive and common member of this genus is orange milkwort (Polygala lutea).  Orange milkwort is common nearly statewide, except the extreme southern counties, and occurs throughout the Eastern Seaboard, though rare in New York and Pennsylvania. It has similar habitat requirements to its close cousin, candyroot (P. nana) which I have described elsewhere, and it is a biennial with almost-succulent basal leaves that rarely stand taller than 2-3 inches.  These leaves, however, are more oblong and the flower stalks tend to stand several more inches above the leaves.
Orange milkwort, produces a cylindrical head of flowers on a stalk interior to the leaves.  Although blooming is most common in the early summer, it may be found in bloom well into fall.  As the common names implies, the flowers are bright orange in color and extremely showy.
Despite its very showy blooms, orange milkwort has never been commercially propagated by nurseries affiliated with AFNN - The Association of Florida Native Nurseries.  It is relatively easy to grow, however, if provided good sunlight levels and reasonably moist soils - especially during the summer.  If you are hiking about in Florida's pine flatwoods, look for it during the summer in open herbaceous pockets and trails where water collects a bit more than elsewhere. It is worth stopping to take a closer look.
Posted by Hawthorn Hill at 8:20 AM