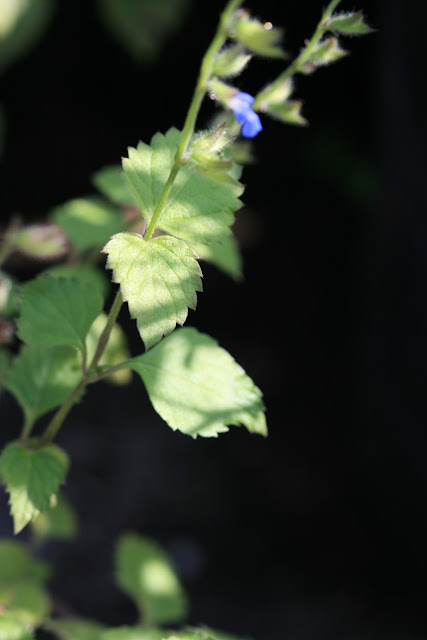 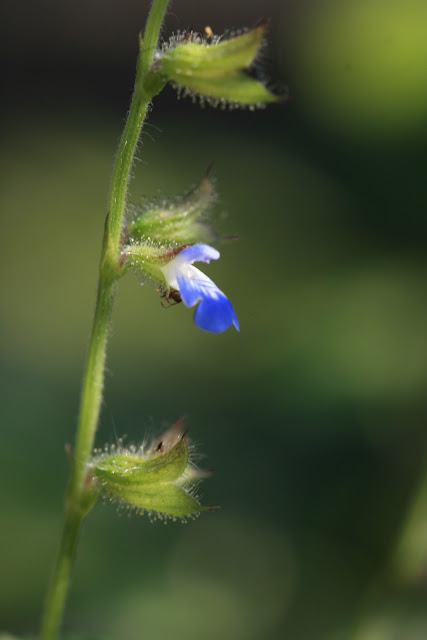 Southern river sage (Salvia misella) is a low-growing groundcover native to the southern half of Florida and in the Caribbean.  It is most common as an understory plant in semi-shaded locations in moist woodlands and it is not especially well adapted to sunnier locations or locations that frequently dry out.
Southern river sage is evergreen and creeps out across the ground from its main central stem.  Normally, it is no taller than 6-8 inches.  The deltoid leaves are opposite on the stem, deeply toothed and with noticeable veins.  This foliage makes an attractive ground cover for locations where grass is difficult.
Blooming can occur during most months; except periods of cold weather.  The tiny flowers occur at the ends of each stem.  They are a brilliant blue in color, but not easily seen from a distance.  Well-grown specimens, however, with numerous flowers make an attractive statement.
Southern river sage is not widely available from native plant nurseries associated with AFNN - the Association of Florida Native Nurseries, but it can be found with some diligence.  Use it in semi- to mostly shady locations where soils are not too droughty.  It can be used effectively with other such groundcovers like Cooley's waterwillow (Justicia cooleyi), wild ginger (Asarum arifolia), and violets (Viola spp.); as well as inland river oats (Chasmanthium latifolium) and witchgrasses (Dicanthelium spp.).  Plant individuals in small masses of at least 3-5 per clump, 12 inches apart.
Posted by Hawthorn Hill at 12:06 PM