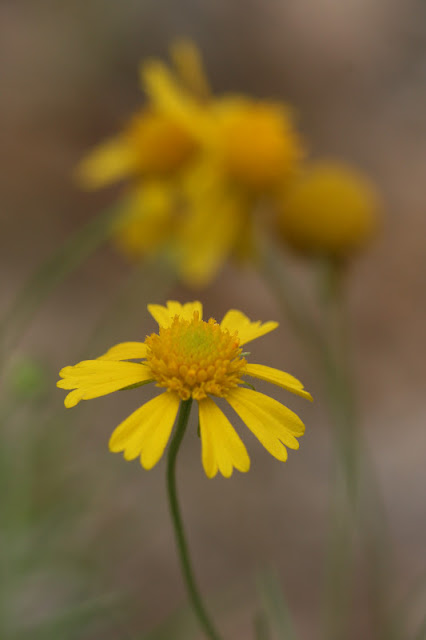 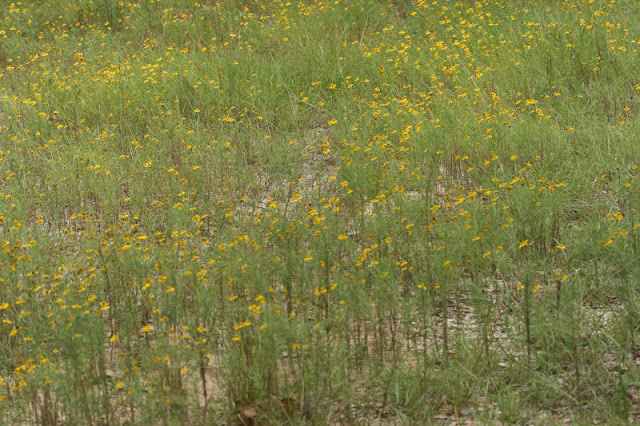 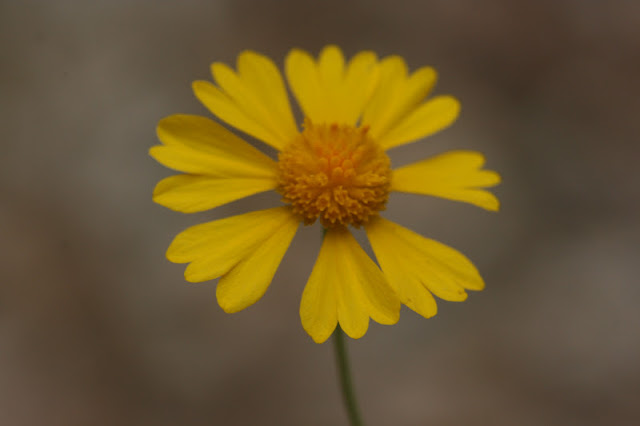 Bitterweed (Helenium amarum) gets little respect with regard to its common name - or the common name of the genus - sneezeweed, but despite this, it is an attractive little wildflower that occurs throughout much of Florida in open fields, disturbed sites and open woodlands.  It also is widely distributed outside of Florida, occurring in nearly every state east of the short grass prairie states and also in California.  Throughout its range, it is generally regarded as a weed, because it rapidly colonizes disturbed ground.
Bitterweed is an annual that reseeds heavily in open soil.  Growth is rapid in the spring, and by late summer it stands between 2-3 feet tall.  The foliage is finely dissected - hence one of its other common names, yellow dogfennel.  The main stem does not branch much unless it is injured early in its growth stage, so it is upright and not very wide in aspect.
Flowering occurs at the top of each main stem in late summer to very early fall.  The bright yellow ray petals surround a rounded central disc and are attractive.  These look a bit like a yellow blanketflower (Gaillardia spp._ and it has been placed in this genus in the past.
Because of its tendency to spread, bitterweed is not a good candidate for most landscape settings. In open expansive dry sites, however, it could make an attractive addition.  It would be controlled by lack of open space in a well-planted landscape and the addition of taller perennials.  It is not currently propagated by any nursery affiliated with FANN - the Florida Association of Native Nurseries and it is unlikely to be any time in the future.  Seed collected from dry spent flower heads germinates easily if you want to try it yourself.
Posted by Hawthorn Hill at 1:06 PM