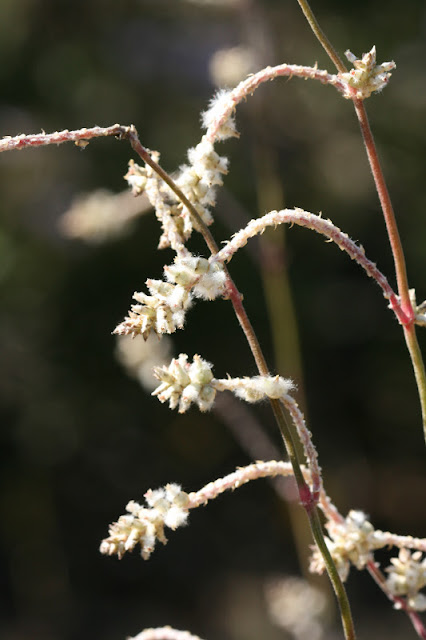 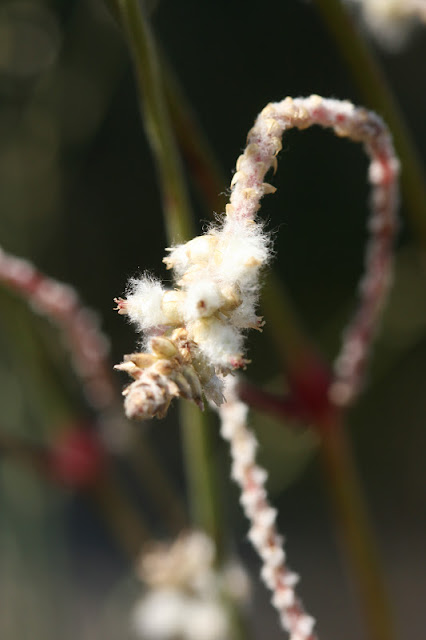 Cottonweed (Froelichia floridana) is an annual member of the Amaranth family found statewide in Florida, and across much of the eastern half of the U.S. except the extreme northeast.  The derivation of its common name is very easy to see from the photos above. This species is most likely to be encountered in disturbed upland sites from coastal areas to inland sandhills. In most of these sites, it will be abundant.
Growth occurs throughout the spring and summer months.  Few leaves are produced. These are mostly near the base of the plant and opposite each other on the stem.  The stem is wiry and erect. By summer it reaches a mature height of 5 feet and is largely unbranched.
Flowering can occur in summer, but is more common in early fall.  Racemes of tiny tubular white flowers are produced near the top of the main stem.  As these flowers are pollinated and mature, the fruiting bodies become cottony in appearance.  Soon after, the fully ripened seed capsules open, releasing the seed below. At this time, they fall off the stem.
This interesting wildflower is commonly encountered, but has never been propagated for the landscape.  It would be easy to grow in a mixed wildflower garden, but care would have to be taken to ensure its need to reseed - most importantly, keeping bare soil near the parent plants. Otherwise, simply enjoy it as you travel throughout the state.

Posted by Hawthorn Hill at 8:33 AM