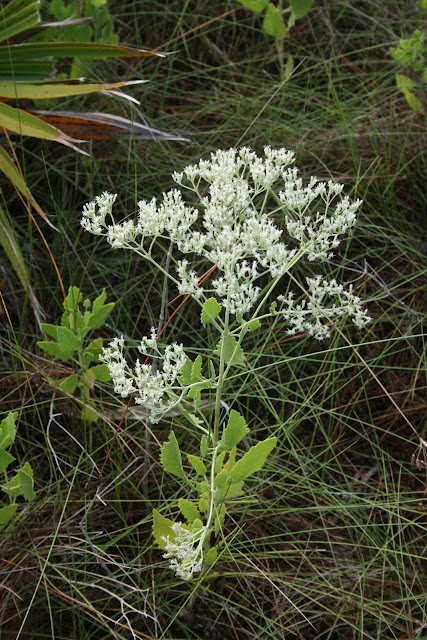 Semaphore thoroughwort (Eupatorium mikanioides) is endemic to Florida and found only along the coastal Panhandle counties and generally along both coasts to the southern end of the peninsula.  It also has been reported in a few inland counties within the peninsula as well.
Like other members of this genus, semaphore thoroughwort is a perennial that dies back to the ground each winter.  What distinguishes this species from its many close relatives is its leaves.  They are simple, opposite along the stem, and nearly succulent in appearance.  Each leaf is broadly arrow shaped, about 2 inches across at the base (except those higher on the stem), and deeply toothed.  They also tend to be held upright along the stem instead of at right angles.
Semaphore thoroughwort occurs most commonly in moist flatwoods near the coast and in ithe upper edges of salt marshes.  It is, therefore, quite salt tolerant. Mature plants reach a height of about 3 feet.
Flowering occurs in late summer and early fall.  It is one of the earlier thoroughworts. Like so many others in this genus, the flowers occur in broad corymbs - flattened heads, and each bloom is white in color. All asters attract pollinators and this species is no exception.
Semaphore thoroughwort is common in the habitats it occurs in, and its foliage and broad flower heads are attractive.  It has never, to my knowledge, been grown commercially and I have no experience with it in my landscape in Pinellas County. It is one of those many wildlfowers that we will simply admire as we explore the wild areas of this state. 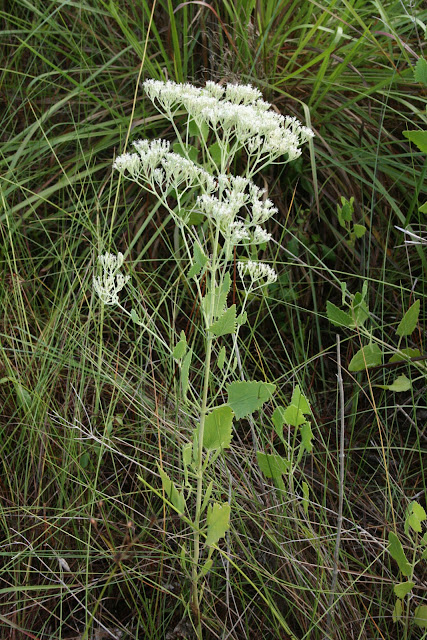 Posted by Hawthorn Hill at 6:04 AM