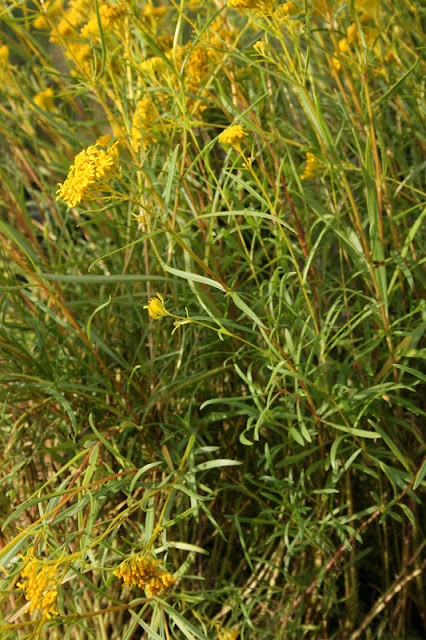 Narrowleaf yellowtops (Flaveria linearis) is a widely distributed wildflower in Florida, found in most coastal counties except the panhandle.  This species is a near endemic as it is not found elsewhere in the U.S.  It is found, however, in Cuba and a few other Caribbean islands.  It is quite similar to the endemic Florida yellowtops (F. floridana) - found only in west-central Florida and distinguished mostly by its slightly wider leaves and the presence of noticeable green leafy bracts beneath the flower heads.
Narrowleaf yellowtops is primarily a coastal wildflower, but can be encountered in a wide variety of moist to upland sites including old fields, coastal strand and salt marsh communities.  It is a perennial, semi-woody species that stands about three feet tall in late fall.  The stiff thin stems turn brown and carry the thin elliptical leaves that are opposite each other.  Plants eventually sucker by underground rhizomes and colonies are formed.
Flowering occurs in fall and lasts for several weeks.  Flat corymbs of canary yellow flowers make this plant especially showy. Like other members of the aster family, these flowers are visited by a large number of pollinators.
All yellowtops are attractive in the home landscape when grown with some care and cultivation.  In nature, they can get a bit leggy if conditions are less than optimal.  They can be maintained well in most typical landscape settings, but they prefer a bit of extra moisture during the summer and early fall.  Its one major drawback is its tendency to spread. Do not attempt yellowtops in small planting beds, but use it in more-expansive settings where its bright yellow flowers can be admired in mass.
Narrowleaf yellowtops is widely propagated by nurseries affiliated with FANN - The Florida Association of Native Nurseries.
Posted by Hawthorn Hill at 3:21 PM