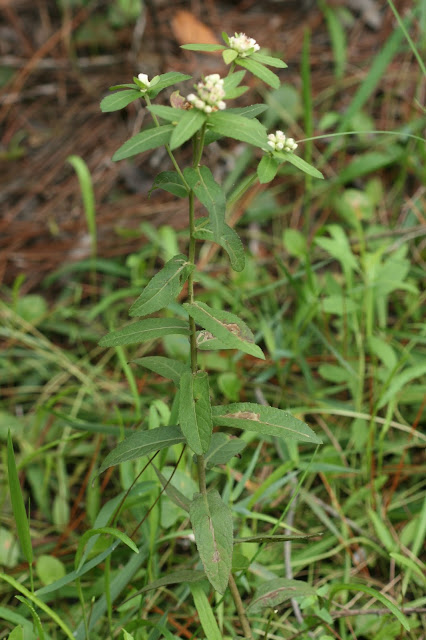 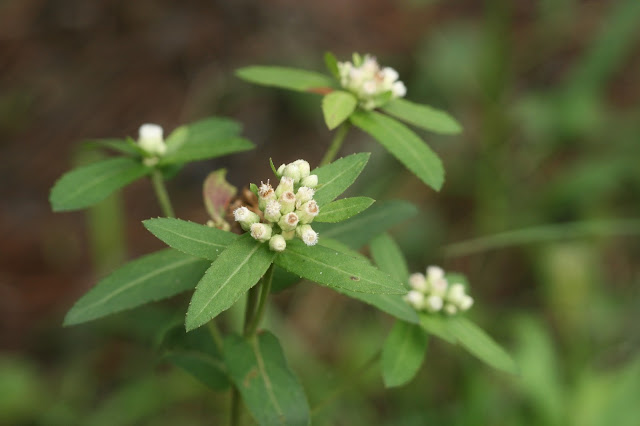 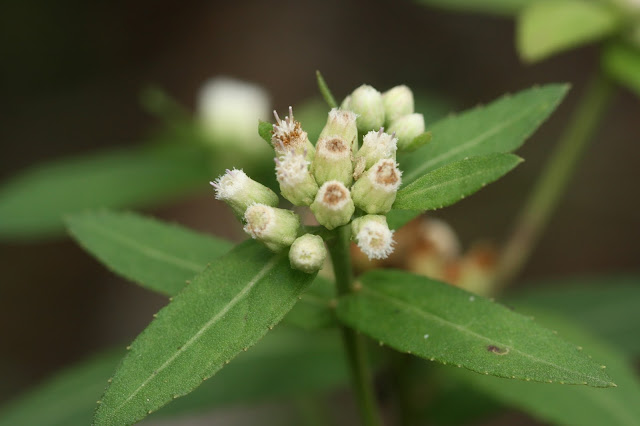 Stinking camphorweed (Pluchea foetida) occurs statewide in a variety of freshwater wetland habitats. It also is reported throughout the Southeast Coastal Plain from New Jersey on the east coast to Texas on the west. Though all members of this genus exude a strong camphor-like fragrance when their foliage is crushed, stinking camphorweed is especially aromatic.
This is a short-lived perennial herbaceous species.  It tends to die back to the ground in winter and re-emerges in early spring. By mid-summer, it reaches its mature height of 2-3 feet.  The stout stem is often reddish in color, but this is variable. The specimens photographed above in early September near Pensacola, Florida had very little red in their stems.
Stinking camphorweed shares many characteristics with a Florida endemic, P. longifolia.  Key differences lie in the foliage. Both species have elliptical leaves that clasp the stem (sessile - without a petiole) and with teeth along the margins, but the leaves of stinking camphorweed are a bit narrower and more widely spaced on the stem. In P. longifolia, the leaves nearly overlap each other.
Like other members of this genus, the flowers are arranged in small heads at the end of the stem and lack ray petals. The flowers of stinking camphorweed are white - sometimes with a faint blush of pink. They are not especially showy, but attract the attention of various pollinators. Blooming occurs from mid-summer through early fall.
Stinking camphorweed is commonly encountered throughout Florida in freshwater wetlands and along roadway ditches. It has never been commercially propagated by members of FANN - the Florida Association of Native Nurseries. Camphorweeds normally spread rapidly by underground runners. This habit and this species' understated aesthetics make it unlikely to be offered for home landscapes in the future.
Posted by Hawthorn Hill at 5:42 AM