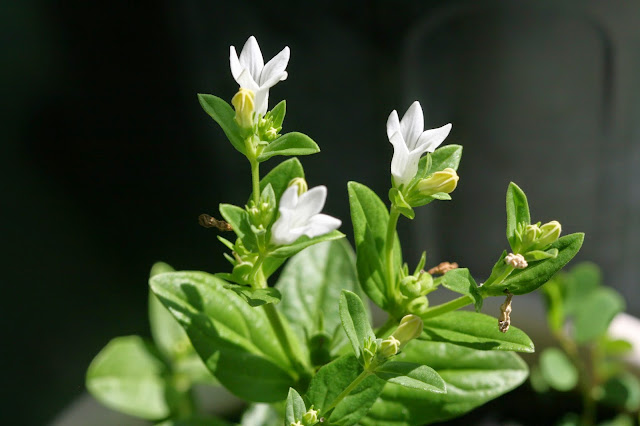 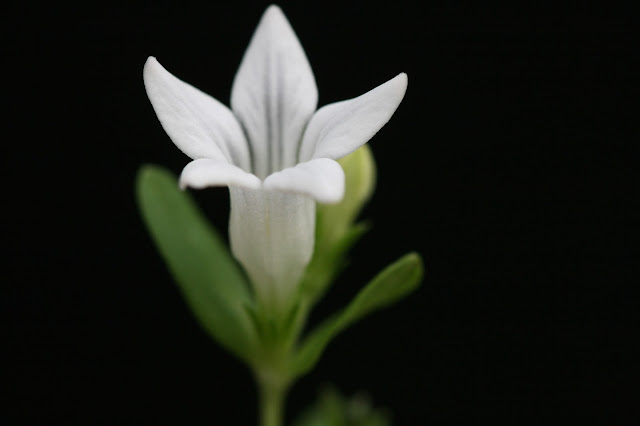 Florida pinkroot (Spigelia loganioides) is an endemic perennial herb native to a five-county area in north peninsular Florida.  Throughout this confined range it occurs in floodplain forests and moist hammocks, often in soils underlain with limestone.  According to the Florida Natural Areas Inventory (FNAI), it is known from only 10 populations. As such, ii is listed as a state endangered species. Florida pinkroot is related to the relatively common Indian pink (Spigelia marilandica), but is easily identified by its very small stature and white blooms. It is not as easily told apart from another rare white-flowered cousin, gentian pinkroot (Spigelia gentianoides). Gentian pinkroot is found in a very small portion of the central Panhandle around Torreya State Park and has flowers in a terminal spike. It also is a spring bloomer, while Florida pinkroot blooms in summer and has flowers in the forks of its leafy branches.
Florida pinkroot dies to the ground in winter. At maturity (late May), it reaches only 8 inches tall. The plants are upright on thin stems that are semi-woody at the base. Several stems occur on well-established plants. The leaves are about 1 inch long, oval in shape with a pointed end, and opposite each other on the stem.  The leaves also are without a petiole (sessile).
Flowering occurs in summer. The white buds, often with lavender overtones, are produced singly or in very small clusters near the top of the stems and in the leaf axils just below the top.  The open flowers are tubular, with five flaring lobes. Each bloom is white with darkish/purplish lines running the length of the tube and less than 1/2 inch in length.
Florida pinkroot is an interesting addition to our State's flora, but its small size makes it an unlikely candidate for commercial production. The plants photographed above were grown by my friend Rufino Osorio and one was given to me on a recent visit to his home. It has done well under pot culture for both of us, but requires ample moisture to maintain it.  Alexa and I do not expect to propagate this in the future at Hawthorn Hill, but to admire it for its simple beauty.

Posted by Hawthorn Hill at 8:39 AM