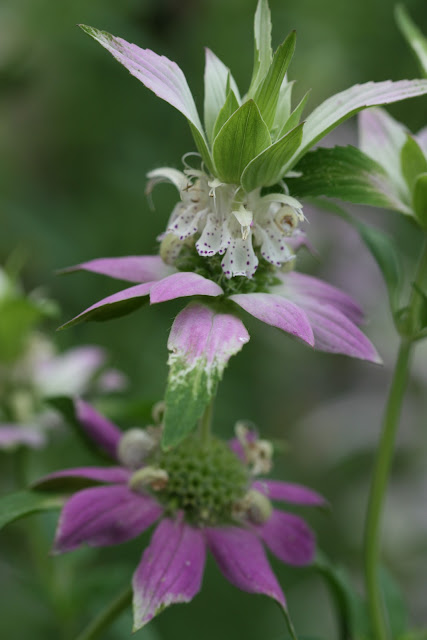 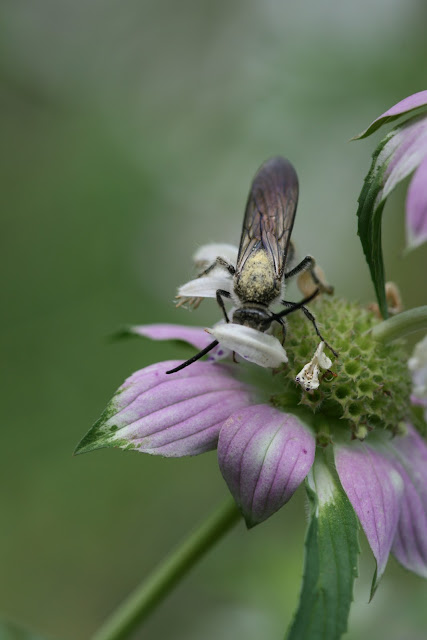 Dotted horsemint (Monarda punctata), or spotted beebalm is Florida's version of a genus widely used in wildflower gardens throughout North America. It may not be quite as showy as some of those other species, but it is just as fantastic in bringing in a huge assortment of pollinating insects. When in bloom, you will see species of bees and pollinating wasps that you never knew existed in your area and it is a show not repeated by the use of any other wildflower.
Dotted horsement is the only Monarda native to Florida, though several other species get close to our border.  It is found statewide and is distributed throughout the eastern half of North America besides.  It is a deciduous perennial that dies to the ground each winter and emerges each spring as a rosette of linear basal leaves.  In many parts of Florida, where temperatures do not get too cold, this basal rosette persists through the winter though the top dies.
This is a very tall and robust species.  Dotted horsemint very quickly establishes itself each spring, and by early summer, it may be 4-6 feet tall.  At this time, it is a dominant component of the garden and often out-competes less robust species planted near it.  By fall, areas of this species may have become virtual monocultures.  For this reason, I think it is best used in patches set aside exclusively for it.
As a mint, it has square stems and very aromatic foliage.  The leaves are linear and toothed along the edges.  It is not an especially beautiful foliage plant, but it makes up for that when it blooms.  Blooming occurs in late summer and may extend for more than a month into mid-fall.  Like other beebalms, the flowers are actually small and arranged in a whorl around the stem; repeated a great many times up the stalk.  Each whorl is subtended by showy bracts - modified leaves that look like flower petals.  In dotted horsemint, these bracts range in color from deep lavender to a very pale lavender. The flowers themselves are white with lavender spots.
For the month or so that this plant remains in bloom, it is a flurry of insect activity; making it a science experiment in itself.  Although butterflies and hummingbirds visit ours, it is the diversity of bees and pollinating wasps that is most intriguing.  We grow a great many wildflowers in our gardens at Hawthorn Hill, but many of these pollinators only make an appearance when the dotted horsemint is in bloom and they disappear as soon as its done.
This is an intriguing species for the home landscape, but it must be used in the right situation or it will quickly become a nuisance.  For one, it reseeds itself aggressively.  If left alone, a garden would quickly become a patch of dotted horsemint and nothing else.  I have learned over the years to cut the spent flower stalks soon after blooming is over to reduce the number of seeds that will scatter and to aggressively pull seedlings from everywhere I don't want this plant to spread to each spring and early summer.  We keep it confined to a back corner of our garden, near the road, where everyone walking past can admire its better qualities. And we always get positive comments from our neighbors while it is in flower.
Dotted horsement does not mix well with most other wildflowers and I think it does best when given a back corner somewhere all to itself.  It handles almost any soil condition, but needs good sunlight to perform well. It is widely grown commercially and should be easy to locate.  And, if you are a member of a local chapter of the Florida Native Plant Society, I suspect that someone there would gladly give you a few seeds or seedlings to get you started.  Just be prepared to pay for it in regular maintenance.  To me the effort is worth it, but give it your consideration before you add it to your landscape.
Posted by Hawthorn Hill at 6:15 AM