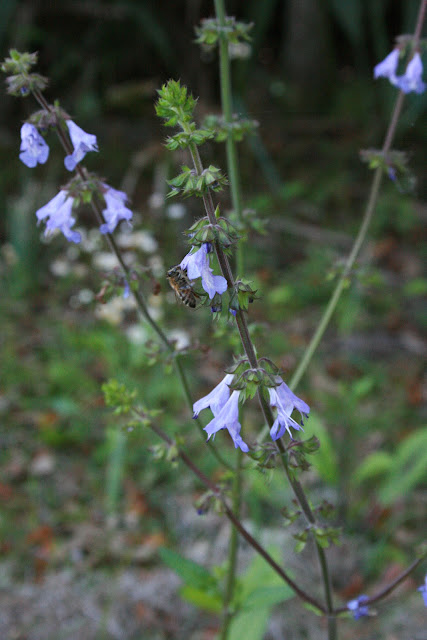 Lyre-leaved sage (Salvia lyrata) is the other commonly planted salvia native to Florida.  It occurs statewide in Florida and in most states in the eastern half of North America.  Lyre-leaved sage is most common to woodland edges in partial sunny locations, but is exceptionally adaptable and can be grown nearly everywhere except near salt water. In sunny locations, it needs additional moisture.
This is a perennial that keeps its basal leaves throughout the winter months unless temperatures are exceptionally cold.  As the common and Latin names imply, these leaves are somewhat "lyre-shaped" and they have an irregular purplish blotch in the center of each.  This makes it unique and easy to identify even when the plants are not in bloom.
Lyre-leaved sage exists for most of the year as a simple basal rosette. The leaves, lying close to the ground, can be mowed over to no effect and can withstand some foot traffic as well.  For this reason, it makes a suitable groundcover for lower light situations where grass is either not wanted or performs poorly.
Blooming is confined to a distinct time period in the spring.  The 2-3 foot tall flower stalks arise quickly in the early spring and the pale blue flowers appear soon after.  Though not nearly as showy as its close cousin, scarlet sage (Salvia coccinea), these flowers are attractive.  They are mostly pollinated by bees.  Like the violets, (Viola spp.), lyre-leaved sage sometimes also produces self-pollinating flower buds (cleistogamous flowers) in the fall which produce fertile seeds, but never open as "flowers".
This plant quickly spreads in the landscape when it finds conditions to its liking, but it is not aggressive and can be easily controlled by periodic weeding of the seedlings or by deadheading the spent flower stalks right after blooming.  Of course, this trait is a real boon to anyone wanting to fill in a difficult, semi-shady area where little else is easy to grow.
Lyre-leaved sage is available from a wide variety of nurseries associated with AFNN - the Association of Florida Native Nurseries.  Plant it in clusters of at least 5 or it will get lost in a mixed wildflower planting and plant each clump at least 4-5 feet apart,  In a few years, these clumps will merge together if you wish them to.
Posted by Hawthorn Hill at 10:27 AM