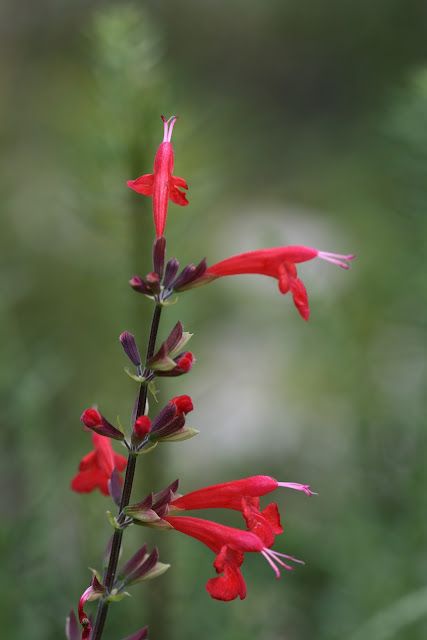 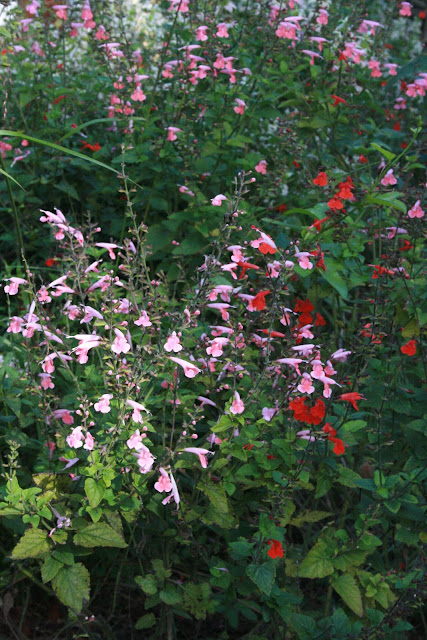 Scarlet sage (Salvia coccinea), or red salvia, may be the most commonly planted Florida wildflower, at least in the southern half of the state.  It is exceptionally adaptable, long-blooming, and extremely valuable in the butterfly/wildflower garden; so its wide use is quite understandable.  Scarlet sage is found throughout Florida and in all of the states bordering the Gulf of Mexico.  It is most abundant in open habitats with well-drained soils, but can occur nearly everywhere except where soils remain too wet.  It also has minimal salt tolerance.
Scarlet sage is a short-lived perennial that persists over time by reseeding itself vigorously.  Individual plants may bloom through the winter if temperatures do not go below freezing or spend the winter vegetatively if the winters are cold.  Without an occasional cold/freezing evening, this plant may get rather lanky and become 3-4 feet tall.  When this occurs, it is best to prune it a bit to keep it fuller in character.
Like all mints, scarlet sage has a square stem and opposite leaves that are strongly aromatic when bruised.  The leaves are deltoid in shape with toothed margins.
Blooming can occur nearly all year.  The bright scarlet flowers are produced in mass and occur at 90 degrees from the flower stems.  Each flower is about 1 inch long and decidedly tubular.  Scarlet salvia  flowers attract the attention of nearly every pollinating insect; but especially bees and larger butterflies such as cloudless sulphurs and swallowtails.  They also are superb hummingbird nectar sources and a wonderful component of any hummingbird garden.
Thankfully, this wildflower is widely grown and very easy to locate from commercial nurseries.  A range of other color forms have been produced; most commonly white and pink, but salmon and bi-color forms are also offered.  These are recessive genes, however, and may not persist over time in the landscape if other color forms - especially the dominant red form - are planted nearby.
Use scarlet sage in the mid-portion of a mixed wildflower garden or as an accent plant in a planting all to itself.  It prefers to be planted in open sunny locations, but will also bloom well if used in semi-shady locations.  In too much shade,however, it will become very lanky and not look its best.  Plant it with bright white and blue-colored wildflowers for a "patriotic" look or include wildflowers with yellow blooms as well. Because it blooms nearly all year, it will compliment nearly every other wildflower in your landscape at some time.
Posted by Hawthorn Hill at 9:58 AM