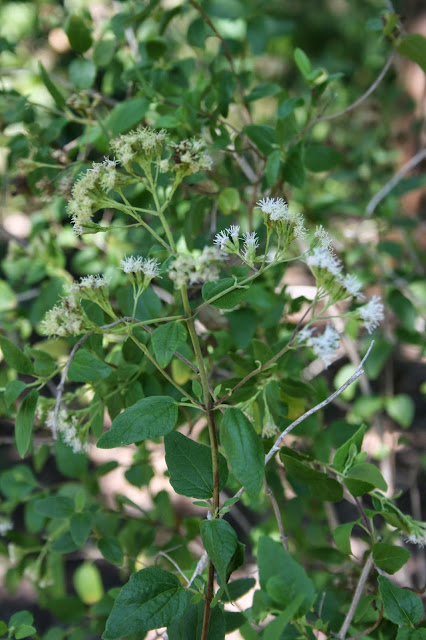 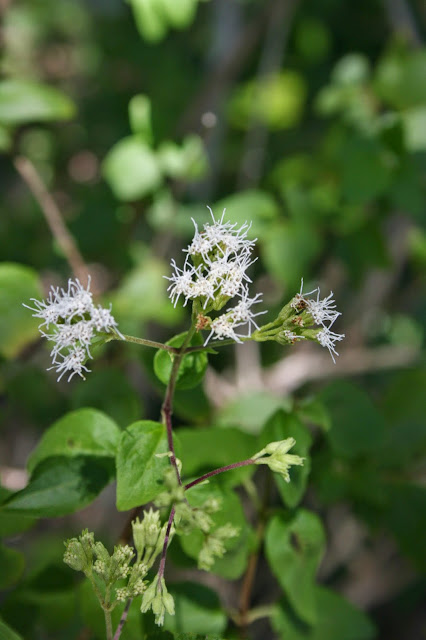 Florida shrub thoroughwort (Koanophyllon villosum) was previously included with the larger genus of herbaceous thoroughworts (Eupatorium spp.) common to Florida and the rest of North America, but has since been placed in this single-species genus. Unlike its close cousins, it is a semi-woody evergreen shrub that can reach 6 feet in height.  In Florida, it is a state-listed endangered species and native only to a few pine rocklands and hammock edges in Miami-Dade County.  It also occurs in the Caribbean.   The plant above was photographed at Mounts Botanical Garden in Palm Beach County in mid-May.
Florida shrub thoroughwort has oval leaves that are often lime-green in color, opposite each other along the reddish stems and with a slight covering of whitish hairs. The edges of the leaves are slightly toothed as well.  Flowering can occur in nearly any month, but is most frequent in autumn. A second bloom is common in the spring.  Small heads of white flowers, typical of other thoroughworts, develop on the ends of the branches. Like other members of the aster family, they attract the interest of pollinators - especially bees and butterflies. The flowers, though not especially showy, are also slightly fragrant.
Evergreen, woody asters are not common in Florida but can be used to great effect in the landscape if placed near the back edge of the planting bed. This species performs best if given ample sun and reasonably well-drained soil.  Though rare in nature, it is sometimes propagated by commercial nurseries and can be found with some sleuthing.  It is easily propagated from seed. I do not have any experience with it in my own landscape, but suspect it is only slightly tolerant of freezing temperatures.
Posted by Hawthorn Hill at 1:45 PM