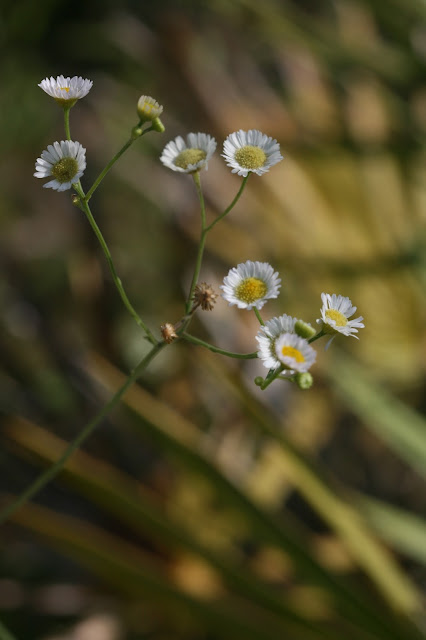 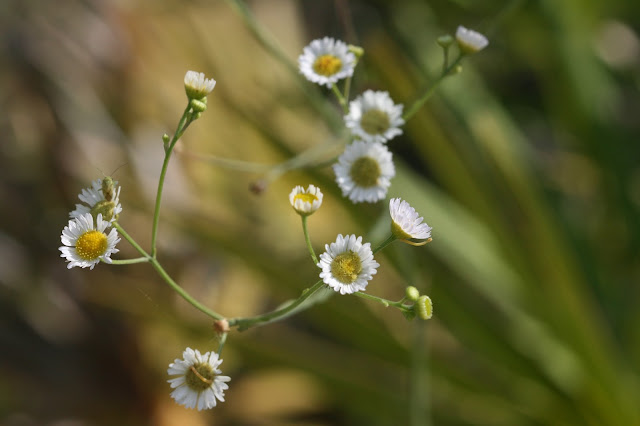 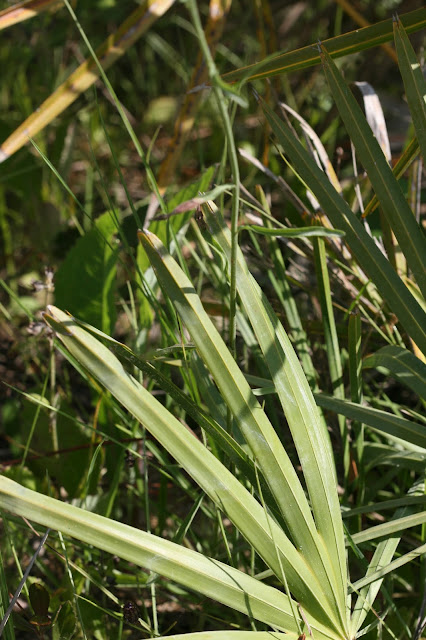 Philadelphia fleabane (Erigeron philadelphicus) is yet another member of this genus native to Florida. It is restricted to 10 counties in the northern areas of the state, mostly in the central panhandle in and around Apalachicola National Forest, but is also is resident to nearly every state and province in North America outside of Mexico.  It occurs in a variety of open and disturbed sites of average to moist soil.
Philadelphia fleabane is mostly a biennial, sometimes a very short-lived perennial.  Its lower leaves (not pictured here) are somewhat heart shaped, but the leaves along the stem are thin and linear.  The stem is covered by rather long stiff hairs and this is one of the best clues to its identification in the field. Growth is rapid in the spring and mature plants can exceed 4 feet in height.  These, photographed in moist pine flatwoods habitat in the Apalachicola National Forest, stood well above the saw palmettos in late May.
Flowering occurs in May and early June in open panicles.  Each bloom is typical of the genus - white ray petals encircling a yellow disk, but the ray petals are numerous and quite short.  Sometimes, they are infused with pink.
All fleabanes were supposedly used at one time to ward off fleas. Philadelphia fleabane has a long association with humans as an herbal medicine.  The Cherokee and other Native American tribes used Philadelphia fleabane for a variety of medicinal purposes including epilepsy. A poultice was made from the plant to treat headaches. The roots were either made into tea or chewed to treat colds and coughs. The smoke from incense made from the plant was inhaled to treat head colds. A snuff was made and sniffed also for head colds. It was mixed with other herbs to also treat headaches and inflammation of the nose and throat. The tea was used to break fevers. The plant was boiled and mixed with tallow to make a balm that could be spread upon sores on the skin. It was used for as an eye medicine to treat “dimness of sight.” It was used as an astringent, a diuretic, and as an aid for kidneys or the gout. The Cherokee and Houma tribes boiled the roots to make a drink for “menstruation troubles” and to induce miscarriages (to treat “suppressed menstruation”). It was also used to treat hemorrhages and for spitting of blood. The Catawba used a drink from the plant to treat heart trouble.
As a garden subject, this is not as showy as some and can be a bit weedy in nature. All fleabanes are good nectar sources for small pollinators, but Philadelphia fleabane has not been offered by native plant nurseries associated with FANN  - the Florida Association of Native Nurseries.  For those of you that may want to add it to a wildflower garden, it could be easily grown by seed collected in mid to late summer.
Posted by Hawthorn Hill at 7:21 AM