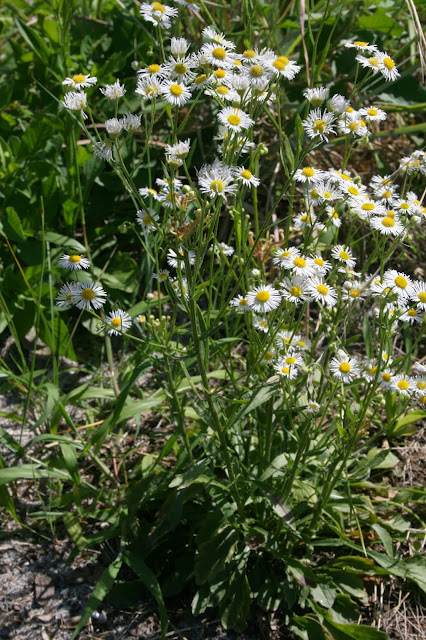 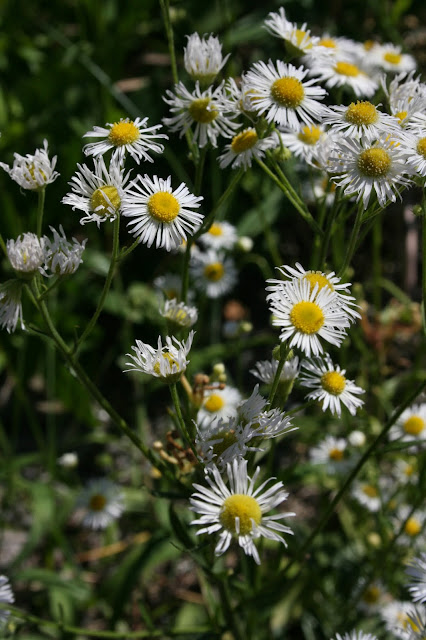 Florida is home to seven species of native fleabanes. For most of us, their identification is difficult. Some of the clues needed are in the shape of the leaves, the timing of their blooming, and the number and shape of the white ray petals that encircle the central yellow disk.
Prairie fleabane (Erigeron strigosus) is common to the northern two-thirds of Florida in open habitats, including disturbed edges of roadways.  It also is found throughout all of North America south of the most-northern tier of Canadian provinces and a few arid states in the US Southwest.  As such, it is an extremely adaptable species.
Prairie fleabane blooms in late spring and early summer. Various sources list it as everything from an annual, biennial and perennial, but it acts more as an annual here in Florida.  Growth is rapid in spring and mature plants can reach 3 feet tall by May.  This species is characterized by linear basal leaves several inches in length.  The lower stems have small stiff hairs that are only really noticeable with a hand lens or by touching the stem lightly.  Another characteristic helpful in making the identification is that the linear leaves tend to be absent about halfway up the flower stalk.
The flowers are typical of the genus - white ray petals and a yellow central disk. Each bloom is about 1/2 inch across and there are a great many thin ray petals along the outside - more than 50 typically and, thus, more than most other species in this genus.
Prairie fleabane is one of the most attractive members of this species for use in a wildflower garden and it is sometimes offered by members of FANN - the Florida Association of Native Nurseries.  All members of the daisy family are valuable for pollinators and fleabanes mostly serve as nectar sources for small bees and small butterflies such as hairstreaks and skippers.  Because it acts mostly like an annual, it will need some bare ground to reseed - or light mulch.
Posted by Hawthorn Hill at 6:47 AM