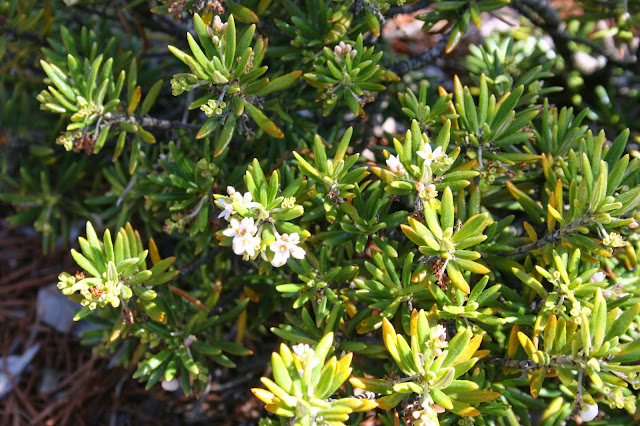 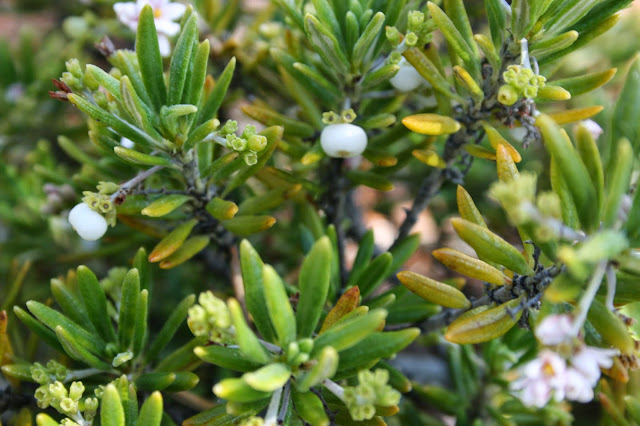 Pride of Big Pine (Strumfia maritima) is a perennial evergreen woody shrub, native to the lower Florida Keys as well as much of the Caribbean, parts of southern Mexico, and Venezuela. As its name implies, it was first described from Big Pine Key, and it is a coastal species found on berms and in pine rocklands.  It is a state-listed endangered species.
Pride of Big Pine can eventually reach a mature height of 6 feet, though it is often considerably shorter and salt pruned.  The linear, somewhat succulent leaves are 1/2-1 inch long and whorled along the stems. The foliage is confined mostly to the ends of the stiff branches.  These features make it an especially interesting foliage plant.
Blooming can occur throughout the year.  Racemes of small pinkish to pure white flowers form at the ends of the branches. Each bloom is composed of five petals and they surround the bright yellow reproductive structures in the center.  Pollinated flowers form spherical bright white fruit, about 1/4 inch in diameter.  The flowers are mostly bee pollinated and the fruit has some value to birds and other wildlife.
Pride of Big Pine makes an exceptionally attractive landscape plant in locations where it will not receive freezing temperatures.  Give it plenty of sun and average soil conditions. Though rare in Florida, it is grown commercially by several native nurseries in extreme South Florida.  Do not attempt it in locations unprotected from temperatures below freezing.
Posted by Hawthorn Hill at 2:27 PM