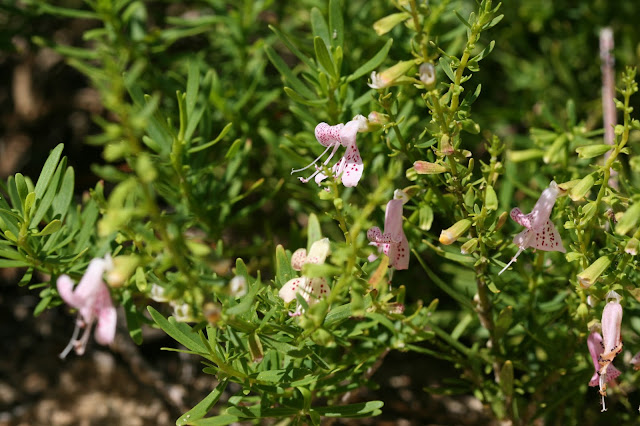 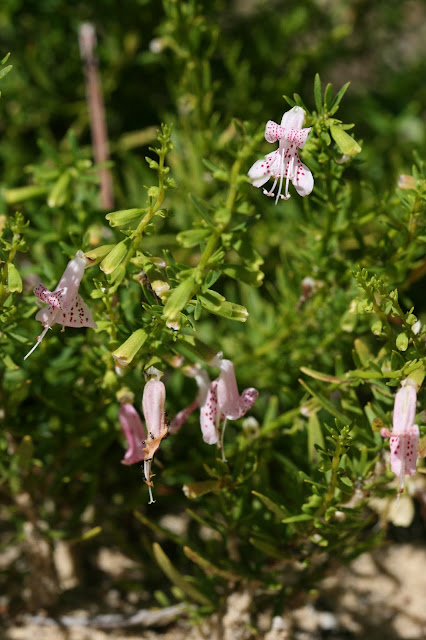 Scrub balm is one of seven perennial Dicerandra species native to Florida.  A seventh species (D. linearifolia) is an annual. All are short-lived evergreen woody mints confined to small regional patches of yellow-sand scrub and all are extremely rare endemics, listed as federal endangered species. Scrub balm is found in extreme southern Highlands County in and near Archbold Biological Station, south of Lake Placid.
Dicerandra species all have distinctively fragrant minty foliage. Scrub balm is no exception. Its thick, glossy linear leaves are also similar to other species in this genus.  Mature plants are upright on thin woody stems that stand about 1 foot high.  Each plant forms a mound as wide as it is tall.
Flowering occurs in late summer to early fall, though some sporadic blooming can occur earlier. The plants photographed above had a few open flowers when these pictures were taken in late June. The flower shape is typical of the genus - the lower petals are fused to form a broad lip and upper fused petals curl back to form a sort-of-hood and expose the long reproductive organs.  Unlike Christman's mint (D. christmanii), the anthers are purplish to white instead of yellow. The white to pinkish petals are deeply spotted in red dots.
The genus Dicerandra is one of the most unique in Florida and showcases the state's unique geological history consisting of periods of sea level rises and falls.  Most have been protected through land acquisition and land management programs, and scrub balm has populations within the well-managed acreage of Archbold Biological Station south of Lake Placid.  They do not, however, make good additions to home landscapes as they hybridize readily with other members of this genus and they are extremely short lived.  Protecting each of Florida's unique species will come with educated land acquisition and management.  They have always been rare. They are endangered now only because of the rapid and excessive development of the state's most well-drained sandy areas.