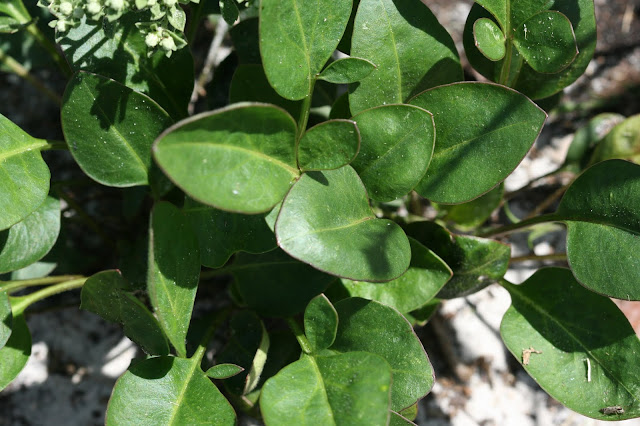 Native, or not?  Earred tickseed (Coreopsis auriculata) is not listed on the ISBN site, Florida Plant Atlas, maintained by the University of South Florida, but others list it as such. It was recorded in Florida from one site near a powerline pole in extreme north Florida, but subsequent trips to that site in recent years have failed to rediscover it. Chances are it was "managed" by the utility company out of existence. I have chosen to label it as a Florida native that seems to have been extirpated. This species is rather common to our north, however, being recorded throughout the Southeast Coastal Plain from Louisiana to the Virginias. In these areas, it is found most often in moist open habitats.
I was fortunate in locating this species from a native plant nursery in north Florida and the photos above are from this plant. To date, it has prospered and spread in my new landscape - in full sun and in the moistest part of my new wildflower planting here in west-central Florida.
Earred tickseed is a beautiful, but rather diminutive species. As its Latin and common names suggest, the foliage is distinctively "earred". Each leaf is deep green and glossy, about 2 inches in length, and often lobed near the petiole with two smaller lobes off of the main one. Mature plants rarely stand taller than about 6 inches when not in bloom. In my landscape, it is an evergreen perennial. Plants form side stems and, over time, it becomes a clump that can extend over a foot in width.
Blooming occurs over a several week period in late spring. The flowers are large considering the size of the plant. Each deeply yellow flower head is several inches across and is very glossy. As with most composites, the flowers attract a wide diversity of pollinators.
I hope that this species makes it into the native plant trade here in Florida and that the plant I purchased was not just a lucky break. I also hope to collect seed from my plant next spring and make it available from Hawthorn Hill. Stayed tuned if you are interested - or search for it from native plant nurseries in Georgia or Alabama.
Posted by Hawthorn Hill at 9:57 AM