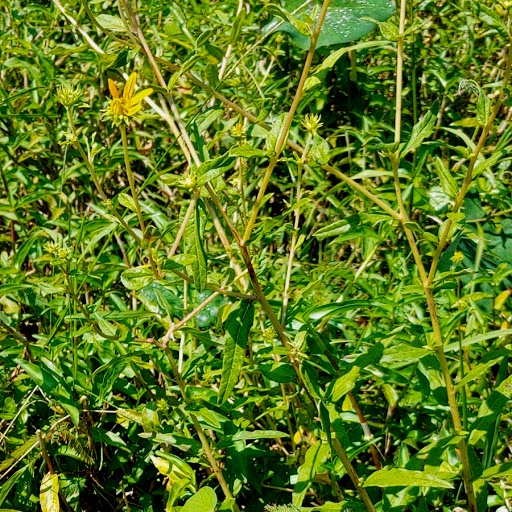 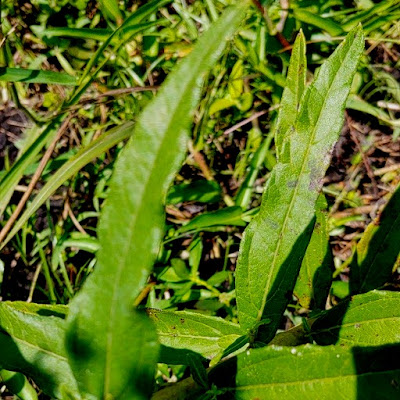 The genus Helianthus is aptly named as Helios was the God of the Sun in ancient Greek culture. There are 16 native species of sunflowers in Florida. Many of them are quite similar in appearance and difficult for the novice to distinguish from each other. Florida sunflower (H. floridanus) is one of those in my opinion. This sunflower shares some of the same characteristics as the common narrow-leaved sunflower (H. angustifolius), but has foliage that differs substantially.
Florida sunflower is a wetland perennial, though it can be found in moist habitats as well. It has been vouchered from Northeast Florida, from the Jacksonville area south to Osceola County. It has not been reported from this region west of the central counties. It also occurs in a four-state region north of us - Georgia, Alabama and the Carolinas. There also are records from Louisiana.
Florida sunflower is a large robust species that may reach 5-6 feet in height by its late-summer blooming season. It has distinctive wide leathery basal leaves that emerge in early spring. Each is about 6-8 inches long and several inches wide. They are deep green in color and glossy in appearance. Multiple branched stems arise from these leaves. Like most sunflowers, it spreads to form colonies that can become extensive over time.
Flowering occurs in late summer and early fall. The showy yellow ray petals surround a disk of yellow disk flowers. The petals are similar to those of narrow-leaved sunflower, but a bit narrower. They attract a wide variety of pollinators.
Florida sunflower grows best in sunny moist habitats. As a landscape plant it needs a lot of room as it spreads by underground rhizomes and its large size tends to overwhelm less-robust species. I have used it quite successfully in central Florida in plantings at the edge of lakes and wetlands, however. This species is only occasionally offered for sale by native plant nurseries affiliated with FANN - the Florida Association of Native Nurseries and it may take some sleuthing to locate plants for sale. I do not intend to add it to the species I offer here at Hawthorn Hill, but I could change my mind if I felt that there was a demand.
Posted by Hawthorn Hill at 8:47 AM