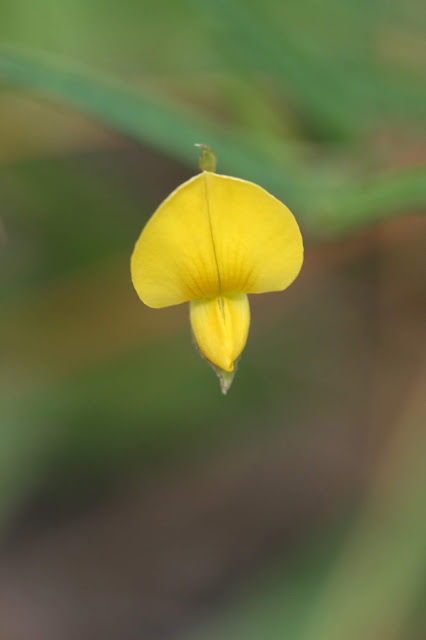 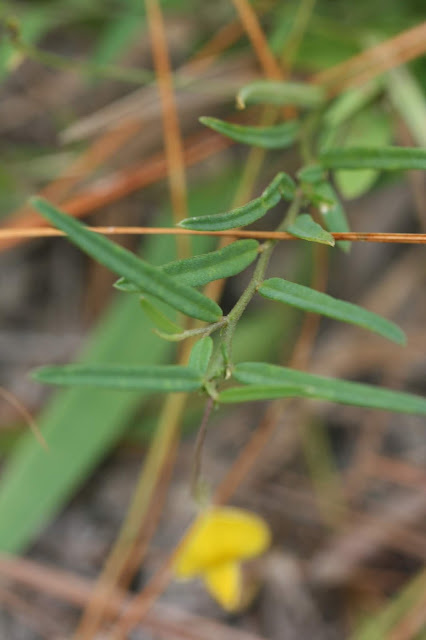 Low rattlebox (Crotalaria maritima) is often considered to be a variant of the common rabbitbells (C. rotundifolia), but it is distinctive and considered a separate species by other taxonomists. Its very distinctive foliage leads me to agree with those that keep these two as separate species. Because of the confusion regarding its status, it is difficult to pinpoint its exact range in Florida and elsewhere. It seems to occur sporadically throughout Florida and there are records from 2 counties in extreme southern Alabama adjacent to Florida.
While the flowers of both species are indistinguishable, it has a different growth form and foliage. While rabbitbells has distinctly rounded leaves, the leaves of low rattlebox are linear, Each leaf is about an inch long and opposite on the stems. This perennial ground cover produces multiple stems that range about 12- 18 inches from the main stem.  They reach only about 6 inches above the ground.
The bright yellow flowers are produced at the ends of these stems and tend to open in the afternoon for a day. They are visited by bees. Pollinated flowers produce a rounded "pea" that turns black in color before splitting open to scatter the seeds. These are a favored food of seed-eating birds such as doves and quail.
Although this species is most-often lumped together with rabbitbells, look for it in well-drained sunny habitats. This specimen was photographed in a sandhill understory in the Ocala National Forest in Polk County.
Posted by Hawthorn Hill at 10:58 AM