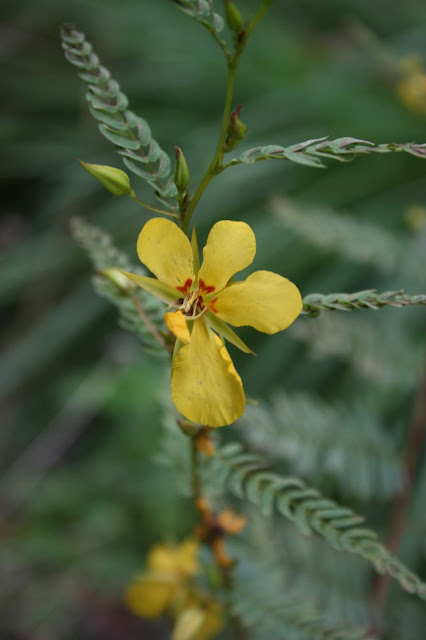 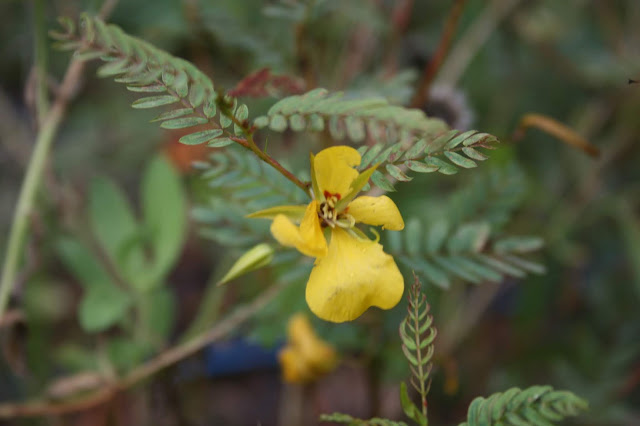 The common partridge pea (Chamaecrista fasciculata) is found throughout Florida in a wide variety of open habitats. It also occurs throughout the eastern two-thirds of the U.S.  It prefers well-drained soils, however, and is most often encountered in open fields as well as in sandhills, dry flatwoods, and along beach dunes. It is salt tolerant.
Plants emerge from the seed bank mostly in early spring and mature rapidly. Unlike its close cousin, sensitive pea (C. nictitans), partridge pea is a rather low-growing species - rarely standing more than two feet tall at maturity.  The leaves and stems are glabrous (without hairs) and the leaflets are not sensitive to touch, though they tend to close up in the evening and reopen the next day. Each leaf is composed of a great many oval leaflets.
Flowering generally occurs in summer and fall. The bright yellow flowers are composed of five unequally sized petals and often have a red mark at their base - as seen in the above photographs.  The flowers are mostly bee pollinated and seem to be especially of interest to bumblebees.  As the common name suggests, the ripened seeds are a favorite food source for ground-feeding birds such as doves and quail.
Partridge pea is a favorite plant among butterfly gardeners as it serves as a larval host plant for at least three species of sulfur butterflies as well the ceraunus blue.  Because of this, it is often propagated by native plant nurseries. As an annual, however, it must be allowed to reseed if it is to persist. This is rarely a problem, however, and most gardeners find that they have to thin the new seedlings out a bit if they are using it in a mixed planting bed.  As flowering occurs over a long number of months, it is usually easy to find some seed along a roadside (never collect in protected areas) and sow them yourself.
Posted by Hawthorn Hill at 9:32 AM