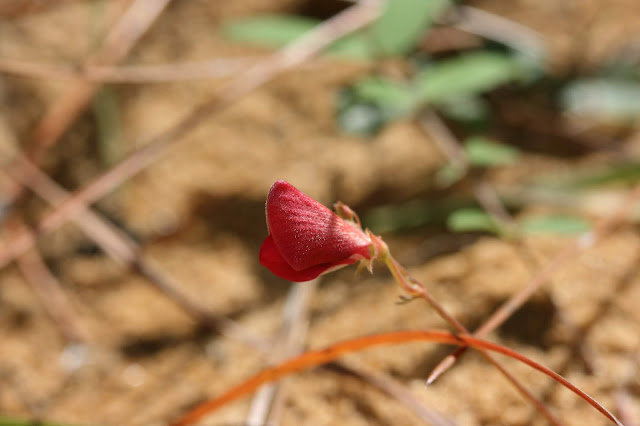 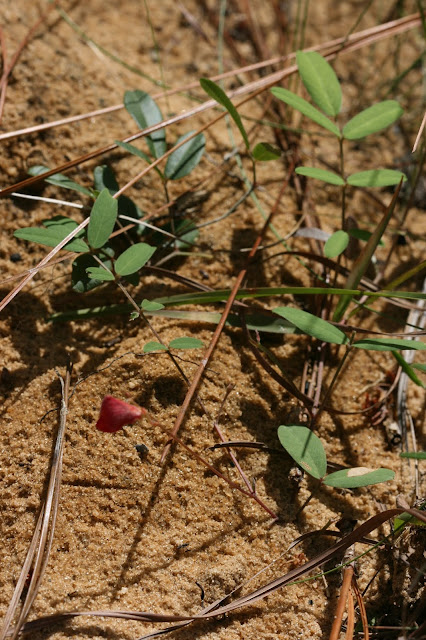 Spiked hoarypeas (Tephrosia spicata) is a species with somewhat confused attributes as its flower buds are red, its flowers start out white when they first open in the morning and turn bright red by afternoon. Therefore, it is a difficult plant to ID simply from its flowers and/or from wildflower books with photographs that don't show this metamorphosis.
This is a species of open, well-drained habitats throughout the state, except for the Florida Keys. It also is reported from the entire Southeastern Coastal Plain from Louisiana up to Maryland on the East Coast. These photographs were taken in sandhill habitat within Ocala National Forest.
Spiked hoarypea is a perennial ground cover that emerges in the spring and sends its long thin stems in multiple directions across the ground.  Like other hoarypeas, the stems, leaves and even the flowers are covered in soft hairs.  Each of its compound leaves are composed of 5-15 oval leaflets and reach a length of almost 1 inch.
As stated above, the flowers are white when they first open in the morning and turn bright red by afternoon. Each bloom is open for a day and they generally occur as pairs on the leaf stem.  Like most members of the legume family, the upper petal is broad and partially covers the fused petals of the lower lip. Each bloom at about 1/2 inch long. Blooming can occur from late spring until mid-fall. Bees are especially interested as pollinators, but it also is used as a host plant by the northern cloudywing skipper.  The seeds, like all legumes, are excellent food for birds such as quail and doves.
For the most part, members of this genus are not propagated by members of the Florida Association of Native Plant Nurseries (FANN) and their somewhat diminutive size and less-than-overwhelming floral display make them a group with limited appeal to the general landscaping public. Their usefulness in a wildlife garden, however, should make then more widely offered. This is not one of the hoarypeas that is currently being propagated at Hawthorn Hill.
Posted by Hawthorn Hill at 7:54 AM