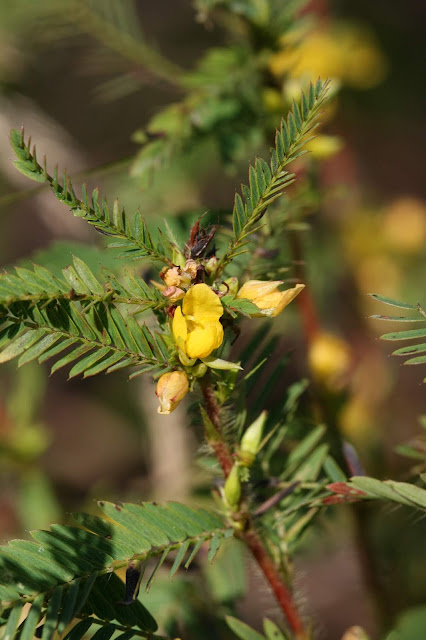 Partridge peas are annuals that serve as larval hosts for several sulfur butterflies when in bloom. They also serve as the host plant for the gray hairstreak and ceraunus blue. Of the seven species recorded for Florida, four are native and two of these are widespread throughout the state. Sensitive pea (Chamaecrista nictitans) is one of these.  Two varieties have been described based on the presence or absence of hairs along the leaf stems. The one photographed above is C. nictitans var. aspera.
Sensitive pea occurs in a wide variety of open habitats. As a somewhat "weedy" species, it is most often encountered in disturbed sites, along trails, and at the edge of roadsides, but it also can be seen in flatwoods and dry prairie habitats.  It is recorded throughout much of the eastern U.S. - from Arizona in the west and in all of the Eastern and Midwestern states to the Atlantic.
This is a robust plant and may reach four feet tall at maturity. The stems are somewhat woody in appearance and it produces numerous upright branches. As in other members of the legume family, the leaves are compound. Each is about 2 inches long with a great many narrow leaflets. What separates this from other members of the genus is that they are touch sensitive. The leaflets fold when touched - as can be seen in the above photograph. They also close as evening approaches and open again the next morning - a phenomenon known as a "sleep movement."
Sensitive pea has smaller yellow flowers than its frequently encountered cousin - partridge pea (C. fasciculata). The blooms also do not fully open in the same way. They are composed of five unequally sized petals.
Sensitive pea is an important host plant for butterfly gardeners, but is weedy and has a tendency to spread - making it a poor player in small mixed wildflower plantings. Perhaps for that reason, it is very infrequently offered for sale by nurseries affiliated with the Florida Association of Native Nurseries (FANN).  It is easy to grow from seed, however. As it remains in flower for most of the growing season, the small hairy seed pods can also be found in most months. If you wish to grow it from seed, scatter them on the soil surface. You won't need very many to get it established.
Posted by Hawthorn Hill at 9:10 AM