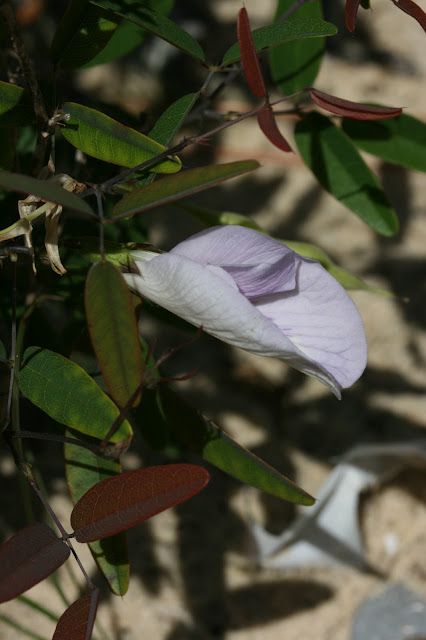 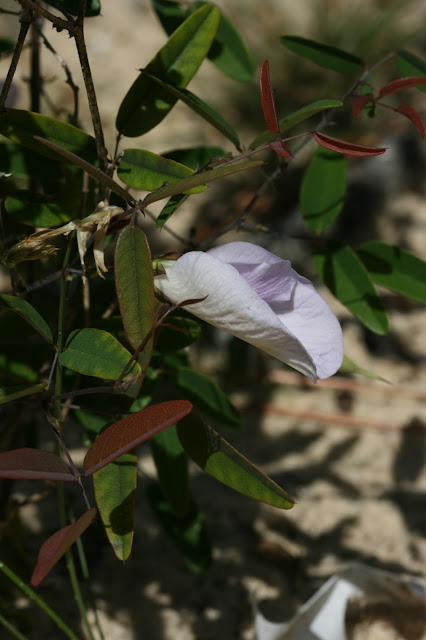 Fragrant pigeonwings (Clitoria fragrans) is a rare endemic, found only in a four-county region along the Lake Wales Ridge (and adjacent ridges) in central Florida. It is federally listed as an endangered species and occurs only in excessively well-drained scrub sands. Pigeonwings and butterfly peas (Centrosema spp.) have flowers that are similar to each other, but have very different growth forms. While butterfly peas are herbaceous vines, pigeonwings are upright herbs. Fragrant pigeonwings can be distinguished from its native close cousin Atlantic pigeonwings (C. mariana) by its much wider leaves.  While those pictured above are oval, the leaves of C. mariana are linear.
Fragrant pigeonwings is a perennial that dies back to the ground in winter.  It emerges early in spring and reaches a mature height of about 12 inches.  New foliage and the slender geniculate stems are reddish in color. Like most other members of the bean family, it has compound leaves. In this family, each is composed of three leaflets.
Flowering occurs in early summer - June and July.  The large showy blooms are produced along the stems for several weeks. The five petals are a light lavender in color with darker purplish lines and a white throat.  As its Latin name suggests, the inner three petals are folded into a keel that is flanked by two outer wings - giving it the appearance of a clitoris - at least to the male-dominated taxonomic world... Pollinated flowers give rise to 1 1/2 - 2 inch beans in early fall. It is not uncommon for Clitoria to produce a second set of flower buds later in the summer that never open and self pollinate - cleistogamous buds.
Fragrant pigeonwings is one of many legumes used by the long-tailed skipper as a host plant. As such, it would make an interesting addition to a butterfly garden in scrub sand. Its small size and the fact that it does not ramble throughout adjacent vegetation, makes it a well-behaved neighbor in a mixed planting, and its attractive flowers and foliage add color and interest. It has never been propagated, however, for that purpose and its classification as a federally listed endangered species makes collecting it or its seed illegal.  Hopefully, it will someday be offered commercially for gardeners lucky enough to have scrub sand in their landscape.

Posted by Hawthorn Hill at 9:08 AM