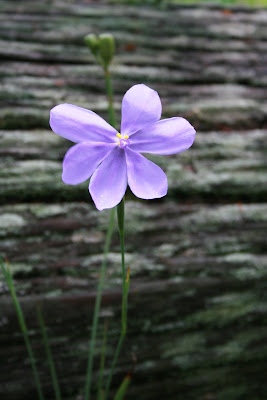 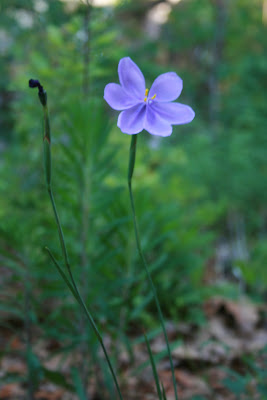 Bartram's ixia is a very rare and beautiful member of the iris family; found only in 7 counties in northeast Florida and nowhere else. In these counties, it occurs in seasonally wet open flatwoods and prairies. Likely always a rare plant (and listed as a state Endangered species), surveying for Bartram's ixia is exacerbated by the fact that it is very difficult to notice when not in bloom and individual flowers only open in the early morning for 2-3 hours before closing. If you are not there to witness these spectacular blooms during this time, the plant fades back into obscurity.

Named for William Bartram who first described this plant in his famous book Travels in the late 1700's, ixias have long fascinated botanists and the few native plant gardeners fortunate enough to have grown them successfully. Though quite rare in nature, it has been grown and offered by native plant nurseries in limited numbers for years.

Bartram's ixia requires good sun and sufficient moisture to prosper. In nature, it responds to frequent fire because this opens the forest floor and canopy to more sunlight and the ash acts as a fertilizer. In the landscape, provide your ixias with good soil and an occasional dose of diluted fertilizer.

Bartram's ixia is deciduous. New leaves emerge in February and are fully formed by March. These leaves are stiff, narrow, and stand about 6-8 inches tall. By April, the shoots that will produce the first flowers become obvious. These come off the side of the main stem. Flower buds do not become obvious until late afternoon the day before blooming and only one flower is produced from any single shoot per day.

Flowers open at sunrise. If you get up early enough, you can catch the swollen buds before they open, but be prepared to need a flashlight to see them. As the sun catches the horizon, the flower buds open and the spectacular deep blue flowers open. These are 6-petaled and nearly 3 inches across. Well-grown specimens may have multiple flower shoots, but most commonly the plants have only one flower at any one time. The flowers remain in good condition for about two hours and then noticeably start to fade. Within three hours or so (depending on cloudiness), the flowers will have folded completely and the seed capsules will begin to form. Bartram's ixia may produce more then 3 flower shoots during the blooming season, however, and repeat this process with each. Our plants bloom into early July.

Bartram's ixia is definitely a connoisseur plant. If you work in the morning, you may never see it flower. But, if are able to catch its wonderful flowers while they are open, this is a wildflower with few rivals.

Hawthorn Hill has been growing Bartram's ixia for 2 years now and hopes to propagate plants from the seed we have collected from them. Check with us from time to time if you are interested: (727) 470-9130.

Posted by Hawthorn Hill at 5:14 AM