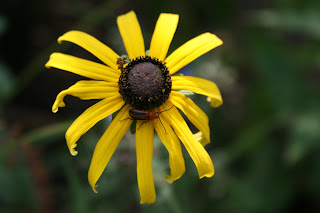 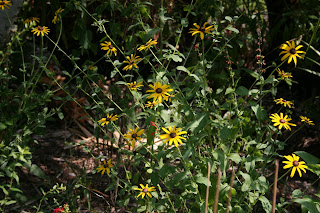 The softhair coneflower (Rudbeckia mollis) is an easy to grow member of the black-eyed susan genus. Native to a rather broad range of north and central Florida, this species has done well for us in Pinellas County over the past several years.

Softhair coneflower is relatively drought tolerant and will thrive in most sunny settings in the typical Florida landscape. Given too much shade, it will become leggy and susceptible to fungal and insect pests. It has fared best in our yard in locations where it gets some protection from the mid-day sun, but plenty of morning and late afternoon rays. One established, it has required no more water than any of the other dry flatwoods and sandhill species it is planted with.

Use softhair coneflower in small groupings near the back of the planting area. In such a setting, it puts on a spectacular display during the late spring and early summer months. A well-grown specimen will reach 4-5 feet tall, and at this height it may have more than 20 flowers at any one time.

The flowers are rather typical black-eyed susan blooms, but the ray petals are flatter and broader than its common cousin and the individual flowers are several inches across. After blooming, most individuals persish. They compensate by producing very large numbers of seed. Plants that we have left alone have spawned many seedlings nearby. You can also collect the seed from the dry heads and propagate it yourself in shallow trays with a good potting soil.

Hawthorn Hill has been propagating this species in this way now for two years with great success.
Posted by Hawthorn Hill at 4:14 PM