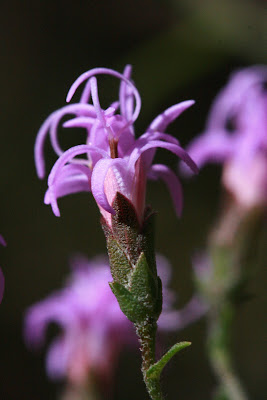 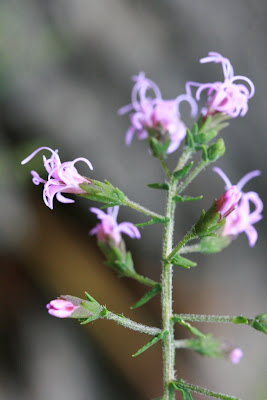 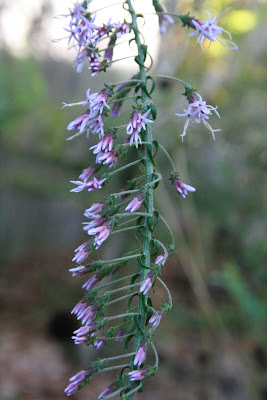 Named for one of Florida's most respected modern botanists, Angus Gholson, Liatris gholsoni is only recently described as a new species of blazing star and is quite rare. At first glance, it appears identical to the common graceful blazing star (L. gracilis), but there are stark differences in the way the leaves come off the main stem, the length of the flower stalk, and the "hairs" on the stem and leaves.

Gholson's blazing star only occurs in the deep sandy ridges around Torreya State Park in extreme north Florida, just west of Tallahassee. As such, it joins a number of other very rare plants found only in this region of the state. It is listed as a state Endangered species not because it is uncommon in its natural range, but because its natural distribution is so restricted.

Like nearly all blazing stars, Gholson's is deciduous. It makes its appearance in early spring as a basal rosette of thin leaves, but starts its upward growth almost immediately. Mature specimens eventually reach 3 feet tall or more before flowering in early fall.

Gholson's blazing star produces a great many flower buds along its main stalk, but the flowers are small and each bud produces only a few flowers. These buds are noticeably held away from the main stem by stalks - quite similar to that of the graceful blazing star. Like most species in this genus, Gholson's blooms in early fall and the flowers attract butterflies, small bees, and a number of other pollinators.
Although restricted in its natural range, we have grown this species in our Pinellas County landscape for several years with great success. Our plants are propagated from seed each year from these plants, and we have a limited number each year to share with other blazing star enthusiasts.

Give this species good drainage and plenty of sun. It will do well with other blazing stars and in a mixed wildflower planting of other sandhill or scrub species.
Posted by Hawthorn Hill at 8:17 AM