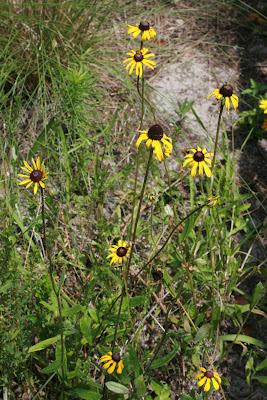 Nearly everyone is familiar with the common black-eyed susan (Rudbeckia hirta) - shown here at the top of this post. While this ubiquitous wildflower takes on many forms across its vast geographical range (every state except Hawaii and nearly every Canadian province except the extreme north), it remains a favorite among wildflower gardeners everywhere.

Perhaps its popularity comes from its simple beauty, the bright yellow ray flowers surrounding a black central disc. It likely also comes from its ease of management. Few wildflowers require less care and reward you with so much.

In Florida, the common black-eyed susan is far less showy than it is elsewhere. Unlike the broad flowers and thick foliage of the Midwestern prairie forms, for example, the Florida variety has flowers that rarely are wider than 6 inches and with leaves that are thin. Even in the best of conditions, black-eyed susans almost never stand taller than 2 feet.

The common black-eyed susan is also short lived. Seed-grown plants normally flower during their first year, but rarely live more than two. The "up side" is that they bloom nearly continuously once they start and they produce copious amounts of seed. Few gardeners do not gain plants over time. Those that don't likely use too much mulch as the seed needs to find the soil surface to germinate.

I use the common black-eyed susan in most of my wildflower plantings - all except the most xeric. I like to combine small clumps of 3 to 5 plants with other species and then let nature take over. Solitary plants are really too thin to provide much impact, but small to large masses are spectacular. Although this species prefers a bit of extra moisture to achieve its full potential, it will survive nearly every growing condition except extreme droughty soils.

Although most of us are familiar with the common species, few recognize that there are a great many other species in Florida and that all of them deserve some use in our landscapes. Eight other species of black-eyed susan (Rudbeckia spp.) are recognized as native to Florida. A few are grown with some regularity by the nursery trade, but most are difficult to find. Hawthorn Hill loves black-eyed susans and we are committed to making some of the less-common species available to the home gardener. Eventually, we hope to have every species growing in our Pinellas County landscape. If there are any species you are looking for, please check in with us from time to time - and let us know your interests.

The following species of Rudbeckia are documented as growing naturally in Florida:

1. R. auriculata - Eared coneflower has been documented in Florida only in Walton County; the western panhandle. It also occurs in scattered populations in Georgia and Alabama, but is not common there also. This species is poorly known and never offered in the nursery trade.
2. R. fulgida - Orange coneflower is somewhat available and occurs in several recognized varieties. Only variety fulgida is considered native to Florida and the species only occurs naturally in 5 counties in the central panhandle. This species is not currently being propagated by Hawthorn Hill.
3. R. graminifolia - Grassleaf coneflower occurs in wetlands within 5 counties in the central Florida panhandle. It is a Florida endemic and quite unique. Unlike other members of this genus, the flowers are small and somewhat inconspicuous. And, the outer ray flowers are a rust brown in color - not the bright yellow we are accustomed to. Hawthorn Hill does not grow this species.
4. R. laciniata - Cutleaf coneflower may well be our favorite. With its broad, deeply-lobed leaves and its showy blooms, we use it in moist locations where it gets a half-day of sun. Under these conditions, it has really prospered and puts on quite a display in mid-summer. In Florida, it naturally occurs only in 5 counties in north Florida, but it is native to nearly all of North America - including most of Canada. We currently propagate this species at Hawthorn Hill.
5. R. mohrii - Mohr's black-eyed susan is a tall thin species native to moist-soil habitats in the east and central panhandle of Florida and a small portion of Georgia. Despite its grass-like leaves that provide little foliage structure and its need for moist soils, this black-eyed susan produces showy flowers during the summer months and is well worth growing if you can provide the conditions it requires. Hawthorn Hill has been growing this species for several years within our wetland garden and we hope to have extra plants for sale in 2010. To the best of our knowledge, we are the only licensed nursery currently making this available in the trade.
6. R. mollis - Softhair coneflower is a drought-tolerant robust member of this group native throughout much of north Florida and south to the north-central peninsula. Well-grown specimens may stand 4-5 feet tall and have 20-30 flowers at any one time. Use this species in small groupings in the back of an open or partly sunny area. In our landscape, it is short-lived, but reseeds heavily. We have been propagating this species at Hawthorn Hill from the beginning.
7. R. nitida - Shiny coneflower is another tall wetland species and restricted to Florida, Georgia and Alabama where it is uncommon everywhere. In Florida, it is listed as a state Endangered species. Unlike Mohr's black-eyed susan, it has large strap-like leaves and makes a good showing when not in bloom. In our landscape, this species blooms in late spring. We hope to collect seed from our plants and make this species more widely available beginning in 2010.
8. R. triloba - The diminutive brown-eyed susan is rather rare in Florida, but occurs throughout much of eastern North America. Named for its uniquely lobed leaves, this species rarely stands more than 2 feet tall and the individual flowers are only about half the size (or less) of the common black-eyed susan. It is short-lived and generally does not make to its second year. Brown-eyed susan is grown by several native nurseries in Florida asnd is often available. It is not propagated by Hathorn Hill at this time.
Posted by Hawthorn Hill at 2:10 PM