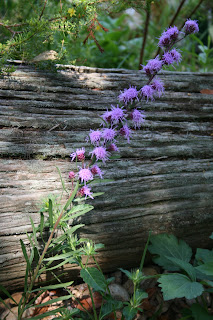 There are 17 distinct species of blazing stars (Liatris spp.) native to Florida, but only a handful that have ever been offered by nurseries affiliated with the Association of Florida Native Nurseries (AFNN). Of those not offered in Florida, some are routinely available from nurseries in states north of us while others are of very limited distribution and have just not caught on in the trade. Hawthorn Hill hopes to rectify that over time by making the uncommonly offered blazing stars available to all of you that appreciate these beautiful wildflowers. In short, we love blazing stars and we want to share them with you.

Blazing stars are members of the aster family, one of the largest families of wildflowers. They are long-lived perennials that die back to the ground and over-winter each year as a semi-woody "bulb" - correctly known as a corm. In the spring, blazing stars produce a basal rosette of grasslike leaves and by summer the long thin flower stalk becomes noticeable and elongates. Most species bloom in late September through early November though a very few may start earlier. And, with very few exceptions, their flowers are a rich shade of lavender.

It is the 2-3 week show of flowers that make growing blazing stars worthwhile. During the remaining weeks and months, they are really nothing special so they should be planted with other wildflowers and native grasses. But, few wildflowers make such a spectacular statement when they are in full flower; their spires of rich color waving above the others and demanding your attention.

Blazing stars bloom from the top down. That trait has made them invaluable to the cut flower trade. For months, their flower stalks grow upwards, but no flowering occurs until the last bud is formed. Then, what was last is now the first to open. Leave the spent flowers on the stalk to produce seed, but if you simply must you can cut it and still have the flowers below it.

Blazing stars are universally loved by butterflies and other pollinating insects. They are an integral part of a good butterfly garden. It is rare to have blooming blazing stars in the garden that don't have a butterfly or two nectaring at it.

All of our species are native to well-drained sandy soil. Only the common dense blazing star (L. spicata) tolerates very moist soil as well as drier conditions and can be planted nearly anywhere statewide. Nearly as universal is the graceful blazing star (L. gracilis), but it will eventually succumb if kept too wet for long. All species grow best when given adequate sunlight and proper soils. Too much care and nutrients may very well cause your plants to get unusually tall and fall over. When this happens, the flower stalk winds along the ground before trying once more to grow skyward. And, this ruins much of the aesthetics.

Below is a list of the blazing stars currently known to be native to Florida. I have put an asterisk (*) next to those that we currently grow in our Pinellas County landscape and a "plus" symbol (+) next to those we currently offer for sale. Hickory Hill is always interested in adding to the number of blazing stars in our collection and, over the years, we hope to increase those we are actively propagating. Although we currently do not commercially propagate the common species, we would be willing to do so under contract conditions if you want us to.