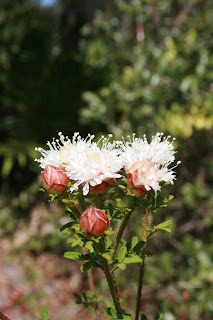 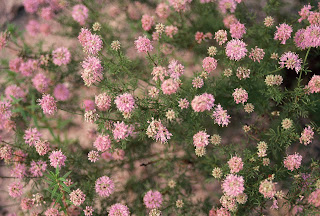 When I lived in the Midwest (a great many years ago, now), I was always intrigued by the prairie clovers, genus Petalostemon, that dotted the tall grass prairies with their color and fine-textured foliage. Today, those wonderful species have been combined with the 3 native Florida species and all of them are included in the genus Dalea.

Prairie clovers are members of the legume family. They thrive here in poor soils and serve to improve them by fixing atmospheric nitrogen through a complex process that ultimately returns it to the soil. Because of this, they are valuable members of a landscape planting without consideration of their other attributes.

But it is precisely these other attributes that make them something everyone takes notice of in the landscape. Our 3 prairie clovers are quite different from each other in growth form and habitat needs. The common pink prairie clover (Dalea carnea) is rather prostrate and spreads outward from its central stem. Although it rarely stands taller than 1 foot, a mature specimen may cover an area 3-5 feet wide in diameter. Scrub prairie clover (D. feayi) and summer farewell (D. pinnata) are stiffly erect in growth form, standing several feet tall and rarely more than one foot in circumference.

The flowers occur in globose heads, each with several dozen or more individual flowers. Because all of the flowers in a head tend to open at the same time, they are especially showy. Many heads tend to bloom simultaneously and the overall flowering season lasts for several weeks. These blooms attract butterflies and are specially attractive to bees and other similar pollinators.

The foliage of all three species is also fairly similar. The tiny leaves are finely dissected and almost fern-like. In Florida, prairie clovers are tardily deciduous. They re-emerge quickly in the spring and make handsome foliage plants by early summer. Florida's prairie clovers require full sun to reach their best potential.

Florida's prairie clovers have not generally been propagated by nurseries associated with the Association of Florida Native Nurseries (AFNN), but Hawthorn Hill is making all of them available. We grow limited numbers of each species in our Pinellas County landscape and we hope that others will recognize their value to the mixed wildflower garden.

Dalea carnea - Pink prairie clover is a native of flatwoods and prairie habitats where it must contend with seasonal drought and flooding. It is a rather sprawling species that blooms in early summer. As the Latin name suggests, its flowers are a soft pink in color.

Dalea feayi - Scrub prairie clover occurs in the deep, well-drained sands of the Florida scrub. Here, it is an erect species that rarely stands more than 2 feet tall. In the early fall, these plants are covered by bright pink flowers.

Dalea pinnata - Summer farewell is also a plant of well-drained sandy soils, but is found in a wider variety of habitat types. As the name implies, summer farewell blooms in late fall and is one of the last wildflowers to do so. Although the flowers themselves are white, the buds are bright red and the ripened seeds are silvery grey before they disperse.