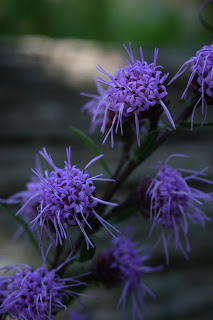 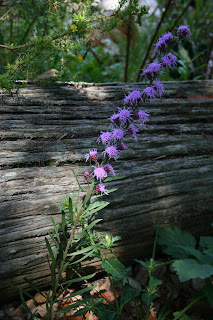 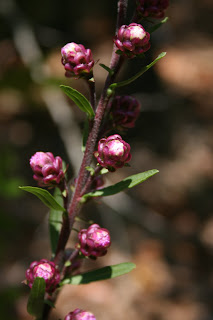 Though sometimes referred to as "Tall blazing star", I prefer to call this wonderful wildflower by the literal translation of its Latin name, L. aspera, meaning "rough." Besides, it is not very tall in comparison with many other native Florida blazing stars; rarely getting taller than 2-3 feet.
Rough blazing star is a rather rare plant in Florida, but it is one of the most widely distributed species in North America. In Florida, it is documented only from 5 counties in the extreme north; Jackson, Leon, Wakulla, Columbia, and Alachua. In the rest of the continent, it occurs in nearly every state in the eastern half (from North Dakota south to Texas and east to the Atlantic) and most of eastern Canada. Though out of its natural range in our Pinellas County landscape, it has done well.

In all of its range, it occurs in sunny locations on well-drained soils. In my Pinellas County garden, rough blazing star emerges from its winter dormancy in early spring, but remains as a basal rosette of dull blue-green leaves until late summer. At this time, it sends its somewhat zigzap flower stalk upward and the large, scaly button-like flower buds soon follow.
It is these large flower heads that make rough blazing star one of the showiest wildflowers in our landscape in late fall. Each head is nearly an inch across and comprised of a great many deep lavender flowers. Unlike many of the blazing stars we grow, most of the buds open up at about the same time - so while the blooming season does not last as long, it is a spectacular show while it lasts.
Rough blazing star is a wonderful butterfly nectar source and pulls in a lot of swallowtails and medium-sized species in our landscape. It also attracts a variety of bees. Because of its stout flower stalk and relatively short stature, the flower stalks rarely flop over and normally remain erect. This enhances its use in the wildflower garden.
Hawthorn Hill began growing this species from seed in 2008 and we are very enthused by the results of our growing trials. Because of this, we intend to offer it in limited numbers from our own stock after it goes to seed this fall. Please inquire if interested: (727) 470-9130 or through the blog.

Posted by Hawthorn Hill at 6:00 AM