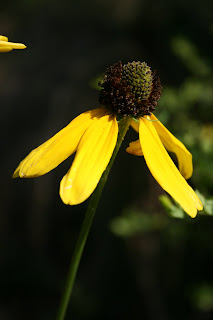 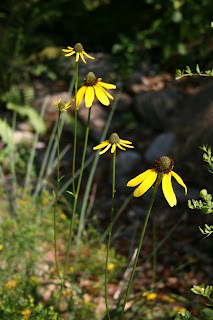 A state Endangered species, the shiny coneflower (Rudbeckia nitida) occurs in wetlands and other moist-soil habitats in a few disjunct populations within north and central Florida. This distinctive species is occasionally offered in gardening catalogs, despite its natural rarity, and is reportedly more adaptable within the home landscape than its natural growing habitats would indicate.
Shiny coneflower is no shy violet and makes a commanding presence in a mixed species wildflower garden. Well-grown specimens may reach 5 to 6 feet in height when in flower during the late spring to early summer months. The basal leaves are several inches wide, erect, and 12-18 inches long - so even when not in bloom this plant is attractive and noticeable.

Large, but typical,black-eyed susan-type flowers occur in small clusters at the top of the stalks. They are relatively short-lived, but put on a show for several weeks to nearly a month. They attract butterflies and many species of small bees.
Use this species to anchor a mixed planting and use several specimens together in a small cluster to maximize its impact. It is deciduous during the winter months, but re-appears in early spring. Although gardeners in states to our north report it to be fairly adaptable to average landscape conditions, I would not use it in typical Florida ones. If you have a moist area that gets at least half sun, shiny coneflower is a wonderful choice.

Hawthorn Hill has grown shiny coneflower in our Pinellas County landscape since 2009. We hope to produce plants for sale from the seed they have produced here and those plants would be ready by spring 2010.
Posted by Hawthorn Hill at 3:41 PM