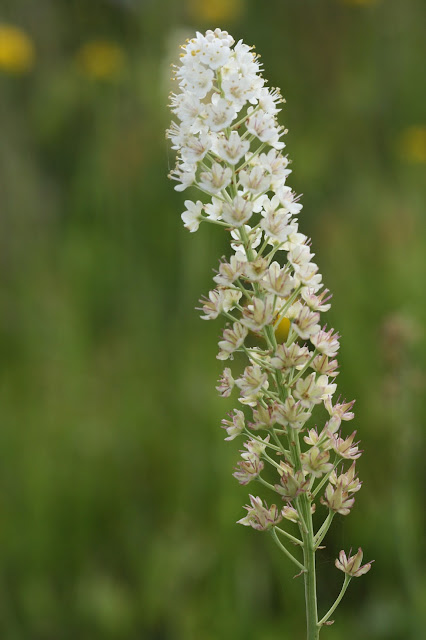 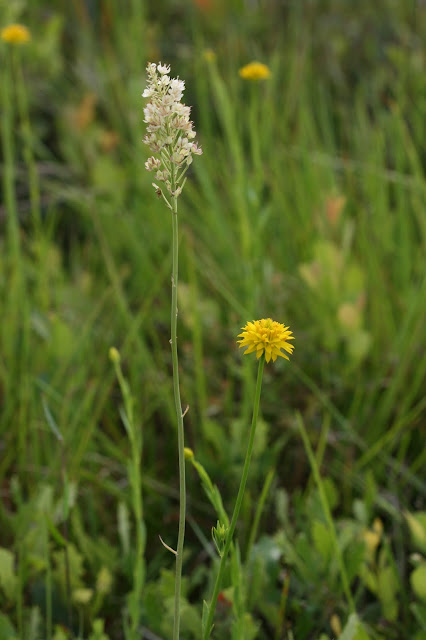 Crow poison (aka Osceola's Plume) (Stenanthium densum) is found throughout much of the northern two-thirds of Florida in moist open savannas and pinelands.  It also occurs throughout much of the Southeastern Coastal Plain - from Virginia to Texas. It is a monocot in the relatively small Melanthium family - the Death Camas.
Crow poison is a perennial forb that dies back to the ground each winter. In the spring, it first forms a whirl of long thin, needle-like leaves before sending a nearly leafless stem 3-5 feet above them. Often, large colonies of this plant are found growing together and flowering seems to be enhanced following fire.
Blooming occurs in spring. The plants photographed above were found in Kissimmee Prairie Preserve State Park in late April, but the vast majority of the plants found that day were several weeks past blooming.  The small white 5-petal flowers are attached at the top of the main stems by long stalks.  This gives them a "fluffy" plume-like appearance, especially when seen from a distance. Flowering occurs from the bottom of the stalk upwards and the older flowers tend to turn a rich rose-red as they age.  The flowers attract a wide variety of pollinators and pollinated blooms form a dark brownish capsule.
Crow poison is a member of a group of plants commonly known as the "death camas", and this species may be the most toxic of the group.  Though extremely showy when in bloom, the foliage contains high levels of several alkaloids that can kill grazing livestock.  The onion-like bulbs can also cause death if ingested.  As such, it should be planted or maintained with some caution if pets or grazing livestock are a concern. This otherwise beautiful species has never been propagated (to my knowledge) by any of the commercial nurseries affiliated with FANN - the Florida Association of Native Nurseries and I have never experimented with it in my own landscapes.  Should you have a chance to purchase it from a reputable nursery, it requires moist sunny conditions to prosper.
Posted by Hawthorn Hill at 8:24 AM