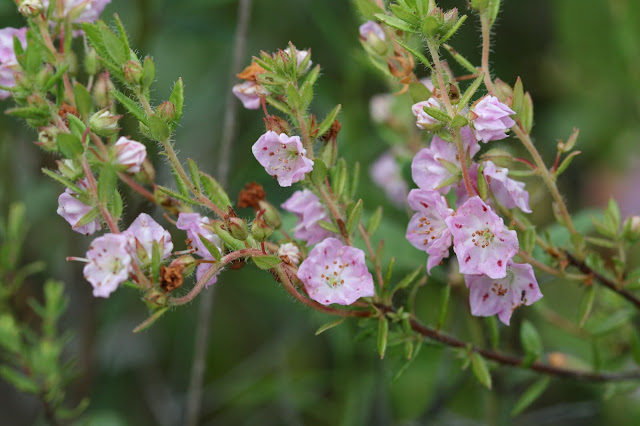 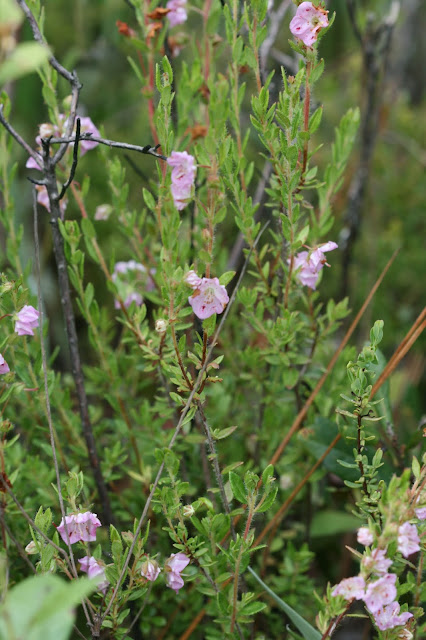 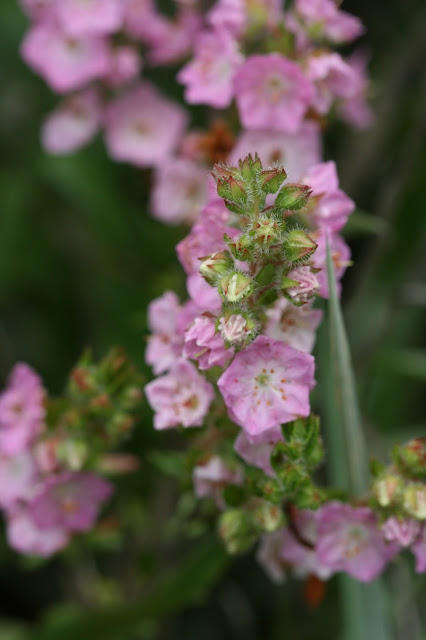 I have not often posted woody species to this wildflower blog, but hairy wicky/sheep laurel (Kalmia hirsuta) seems more a wildflower than a shrub. For one, it's thin woody stems rarely stand taller than 1 foot above the ground and it is hardly noticeable in the understory until it blooms.
Hairy wicky is found throughout much of the Florida Panhandle and along the Eastern Seaboard north to Maine. Throughout this region, it colonizes open acidic habitats, especially ones that are moist to wet during the summer rainy season.  In these habitats, it spreads extensively by underground stems to form large colonies.
The small evergreen leaves tend to be oval in shape with a sharp point at the end. Both the leaves, stems, and flower buds are densely hairy.  They are alternate on the stems.
Flowering occurs in late spring to early summer.  The plants pictured above were found in Apalachicola National Forest in late May. Large numbers of buds are formed at the ends of its many stems. The flowers are variable in color, from deep pink to nearly white and are miniature versions of those found on the horticulturally popular mountain laurel (K. latifolia). Dark pink spots are found inside the cup-like corolla. The blooms are fragrant and very attractive to pollinating insects. The pollinated flowers form a dark hardened capsule.
Though hairy wicky is extremely beautiful when in bloom and would make an excellent ground cover in the right habitat conditions, it has never been propagated in Florida by anyone associated with FANN - the Florida Association of Native Nurseries and a thorough search of the internet failed to find it available in other states as well. Seeds of this species seem to require heat stratification to germinate, but this has not limited production of other difficult species in the past. It is my hope that someone will take it on as their new horticultural project so that those of us interested in native plant landscaping can experiment with its use.
Posted by Hawthorn Hill at 9:06 AM