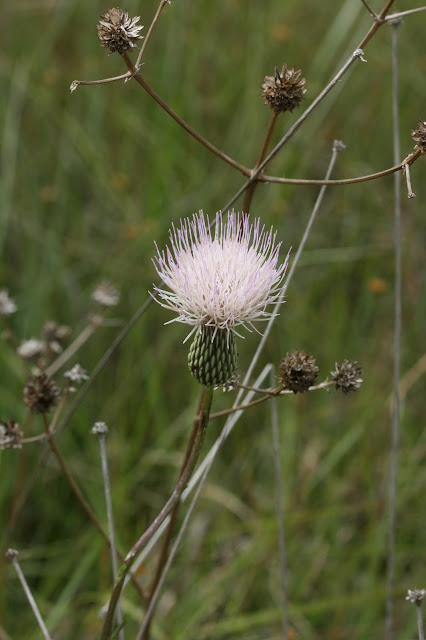 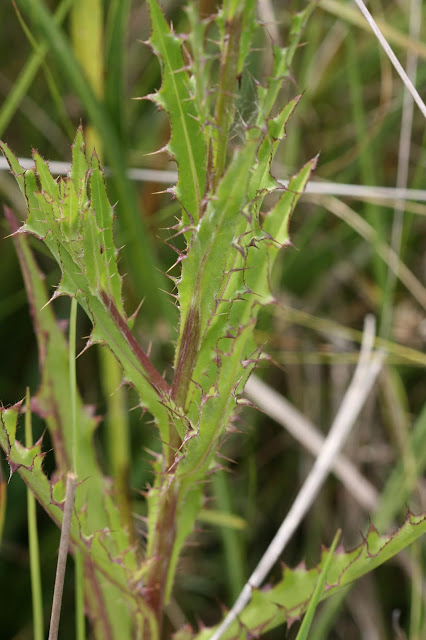 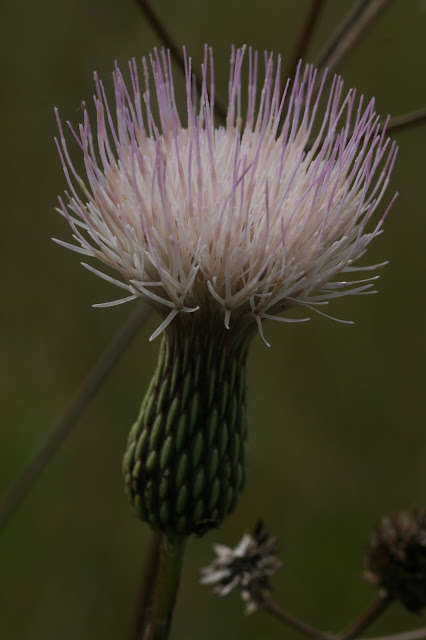 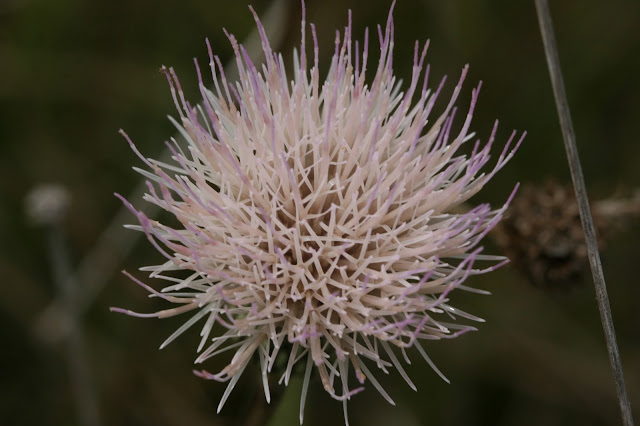 Leconte's thistle (Cirsium lecontei) is somewhat similar in appearance to the more-widespread Nuttall's thistle (C. nuttallii), but differs in several features. For one, Leconte's thistle does not have leaves that ascend the flower stalk. It also is a bit shorter in stature and the flower stalk normally produces only a single flower instead of ending in a branched/multiple flower structure.  The two species barely overlap in geographic range in and around Leon and Wakulla Counties.  Leconte's thistle is found throughout the central and western Panhandle region of Florida. It also occurs in the Southeast Coastal Plain from North Carolina to Louisiana. It is considered "imperiled" in Georgia, "rare" in Louisiana, and of "special concern" in Mississippi.  In Florida, it is common in its rather limited range, in savannas, moist flatwoods, and the edges of open marsh systems.
Leconte's thistle is a perennial herb that dies back to its basal leaves in winter. The lower leaves are narrow - up to 12 inches long, but only about 1 inch wide. The young leaves are velvety in appearance with a dense matted covering of white hairs. The upper leaves are smaller than the basal ones, but are still long and narrow in appearance. Like other thistles, they are armed with stout spines along the leaf margins and stems.
Flowering occurs in mid-summer to early fall. The photos above were taken 13 August 2015 at the upper edge of a pitcher plant bog in Apalachicola National Forest. The leafless flower stalk reaches a mature height of 2-4 feet and the urn-shaped inflorescence is composed of light pink to pinkish purple flowers. These are quite attractive and, like all thistles, are especially favored by a wide variety of pollinating insects.
Thistles are generally considered a nuisance in the landscape because of their thorny nature and tendency to spread. As such, they tend not to be grown commercially and, in some states outside of Florida, it is even illegal to propagate them. Nevertheless, thistles have great value in a pollinator garden - managed by a gardener willing to contain them. Thistles are easily grown from seed collected in late fall and sown just below the soil surface. Leconte's thistle should not be grown outside its natural range and requires sun and moist soils to prosper.
Posted by Hawthorn Hill at 1:26 PM