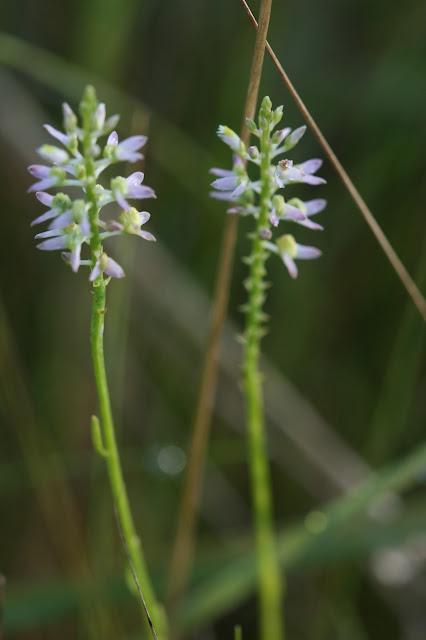 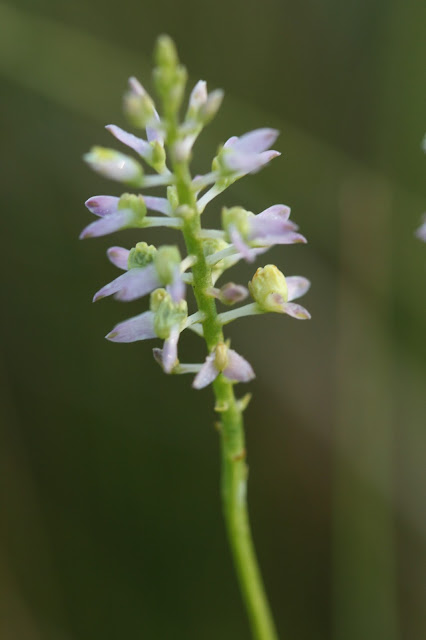 Hooker's milkwort (Polygala hookeri) is one of 22 milkworts native to Florida. Like most, it occurs in marshes and wet pine savannas. The photos above were taken in a pitcher plant bog within the Apalachicola National Forest, Liberty County.  This species is confined to the central and western Panhandle counties of Florida, but also is reported from much of the Southeast Coastal Plain from North Carolina to Texas. It is an annual.
Hooker's milkwort is diminutive in stature and difficult to find when not in bloom. Mature plants rarely stand taller than about 12 inches and are virtually leafless except for some short linear leaves near the base of the flower stalk and scattered along the stem. Those along the main stem often occur in whorls.
Flowering occurs at the top of the stem in mid-summer. The photographs above were taken 13 August 2015. Each bloom is several millimeters across, composed of two light lavender "wing petals" beneath and attached to the stalk by a short petiole.  Where found, it often occurs in distinct clumps within the marsh grasses.
Hooker's milkwort is small, but attractive and distinct. Because of its annual nature, small size, and narrow habitat requirements, it will likely never be grown commercially. Look for it in summer and simply admire it for its uniqueness.