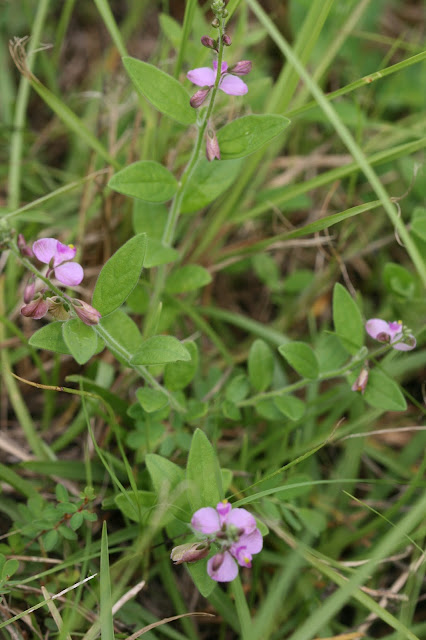 Scalloped milkwort (Polygala crenata) is found throughout the western Panhandle counties in Florida and in the Southeast Coastal Plain states from Georgia to Texas.  In this region it is found at the upper edges of marshes and open savannas, as well as along roadsides.
This species is an herbaceous perennial that forms many stems and has a somewhat "shrublike" appearance. It dies back to the ground in winter and reaches its 1-foot mature height by summer. The leaves are elliptical, opposite along the stem, deeply veined, and about an inch in length.
The flowers are produced in clusters in mid-summer atop each stem. Each is a rosy pink in color with a deep pink lower lip. As in many other milkworts, the two side petals are elongated and form "wings". Multiple flowers remain open at any one time and flowering occurs for several weeks.
I found very little reported on this species. It is not sold commercially, though an attractive wildflower and perennial in nature.
Posted by Hawthorn Hill at 11:32 AM